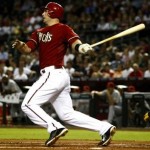 Sweep wraps up exciting week for D-backs
Last week’s D-backs Digest provided the script. This week the Diamondbacks followed it to a tee. It was critical for the D-backs to win both series this week – and that’s exactly what they did. After dropping the opener against Houston, the D-backs responded by winning the next six – including a weekend three-game sweep of the New York Mets. Taking six of seven to close the homestand propelled the D-backs into first place in the NL West. What a difference a week makes
When the week began, the Diamondbacks were still a half game back in pursuit of the San Francisco Giants. Now the D-backs have a two-game lead and plenty of momentum heading into a difficult, long road trip. The D-backs will have to play extremely well on the road in order for the two-game cushion to hold up.

The road trip starts with three games in Philadelphia and Atlanta, then wraps up with a four-game series in Washington against the Nationals. Fortunately, the Giants will spend the week on the road as well with a four games in Atlanta followed by three in Houston. It will be interesting to see if the D-backs can stay hot on the road and also continue to dominate the NL East. So far on the season the D-backs are 32-27 on the road and 14-8 versus NL East opponents. The next 10 days will tell a lot about how the remainder of the season will play out.

D-backs dramatic win on Thursday was Golden
The Diamondbacks win on Thursday night could prove to be one of the turning points in the season. In many ways, the Houston Astros put up more of a fight in the four-game series than expected. The Astros came into the series sporting by far the worst record in the majors.

Houston responded by winning the series opener handily on Monday night. On Tuesday the D-backs needed a heroic comeback to pull off the victory. After a convincing win Wednesday, the D-backs appeared to be finding their grove once again. The D-backs came into game four on Thursday with a chance to extend their NL West lead to a full game with a win. A loss would mean only salvaging a disappointing split in the series and drop the D-backs into a tie with the idle San Francisco Giants. With two outs and a runner on, rookie Paul Goldschmidt was called on to pinch hit. Actually, he was called on to hit a miraculous two-run home run to tie the game – and somehow he delivered. Goldschmidt crushed a 2-2 pitch off the façade near Friday’s Front Row that tied the game. Quite a remarkable feat for a player making his first appearance as a pinch hitter, playing in only his ninth big league game and doing so during a pennant chase. Not often do you see a player square up a ball like that under such dramatic circumstances.

The D-backs went on to win the game with a walk-off, three-run homer by Chris Young in the 10th inning, ending one of the most exciting and important games of the season. The D-backs wrapped up a 3-1 series win and headed into Friday with a one game lead in the division.