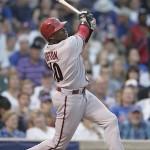 Stage set for first-place showdown
The Diamondbacks current nine-game California road trip is working out according to plan. The D-backs started the trip by taking two of three in San Diego and wrapped up another series win over the weekend in Los Angeles. Meanwhile, the D-backs finally received a little help from the Cincinnati Reds. The Reds did Arizona a favor by sweeping the San Francisco Giants in three-game weekend series.

The D-backs are currently only two games behind the Giants in the NL West standings. The next three days in San Fran are make-or-break time for the Diamondbacks. This represents the opportunity to tighten the race even more or potentially fall further back to a point of no recovery. The D-backs have taken care of business so far on the trip, but it will all be negated if the series is lost in San Francisco. Extra! Extra! Read all about it!
Diamondbacks outfielder Justin Upton entered the game Sunday afternoon sporting an impressive streak of 10 games with an extra base hit. This is the longest such streak this season in the majors. Upton was able to get a single late in the game to extend his hitting streak to 12 games, but unfortunately, the extra base hit steak ended at 10 games. During the current hitting streak J-Up has six home runs and 19 RBI.

He has been leading the club offensively and continues to produce big hits in big situations. Upton appears closer than ever to realizing to potential that’s been talked about since he was taken first overall in the 2005 draft.

D-backs hope to strike Gold(schmidt)
Minor-league prospect Paul Goldschmidt is expected to join the Diamondbacks on Monday in San Francisco. The addition of Goldschmidt should excite D-backs fans. Goldschmidt has crushed minor league pitching for the better part of three seasons and this year playing for Double-A Mobile in the Southern League, has led the league in home runs, RBIs, total bases, slugging percentage and OPS. Goldschmidt is hitting .306 with 30 bombs and 94 RBIs.

With numbers like that, there is reason for optimism and excitement. Goldschmidt could play as early as Monday and has the potential to instantly become an every day player. Last-minute trade deadline activity
The Diamondbacks made room for Goldschmidt when current first baseman Brandon Allen was traded along with pitcher Jordan Norbeto to the Oakland A’s for reliever Brad Ziegler. Ziegler is a right hander with a unique submarine delivery that gives right handed hitters trouble. He should fill in nicely in a set-up role alongside David Hernandez.

The D-backs also acquired veteran starter Jason Marquis from the Washington Nationals. Marquis will most likely be looked on to eat some innings at the back end of the rotation. Overall the D-backs weren’t involved in any blockbuster moves, but the moves that were made should help the team down the stretch. The biggest move could prove to be the promotion of Goldschmidt to the big league club.