Valley Of The Sunflowers 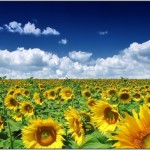 Roosevelt Row typifies how a small group of people can make a huge difference; it’s a place known for action, where ideas discussed over a beer or coffee can become real.

Quick history lesson: From the early days of Phoenix settlement, progress in the city was achieved by local people through local initiatives that brought in outside capital and funds. The people of Phoenix made things happen in town by the sweat of their brow. This legacy continues today. 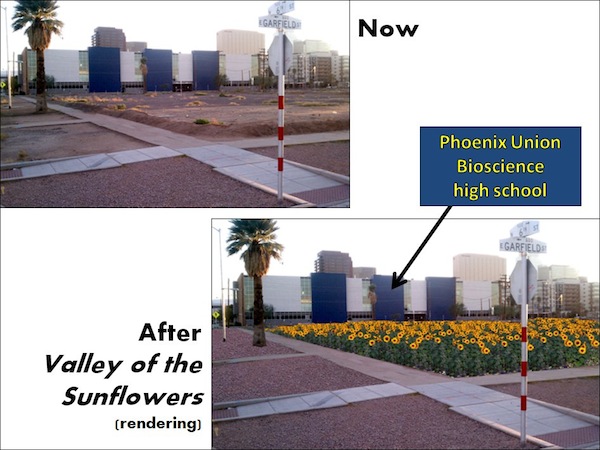 Developing dirt lots downtown, especially on those lots owned by the city, is a challenge for multiple reasons: funding, vision, planning, and politics. For the neighborhood to see development on this vacant land, a magic word must be evoked: temporary.

With this in mind Valley of the Sunflowers was developed. The project on a vacant parcel between 5th and 6th Streets and Garfield and McKinley Streets will bring utility, beauty, and creative use to an abandoned lot in the heart of Roosevelt-if only temporarily.

Sean Sweat made headlines when he tried to reach an agreement with the city to develop a downtown dog park on what is now a parking lot. There is still no downtown dog park, but that hasn’t stopped him from thinking big.

As an employee of Intel, he found grant opportunities and connected with Cindy Dach, Kenny Barrett and Braden Kay. Over drinks at the Rum Bar they discussed ideas and how the grants could be used to help downtown. Barrett suggested a simple, unique idea: a field of sunflowers. The four downtowners realized the multiple benefits of such a project: besides bringing color and life to a brown lot, the seed harvest could produce local sunflower oil to sell at the Phoenix Public Market and the oil could be used as biofuel for the nearby bioscience high school. Maybe even City Hall would be on board and willing to cooperate.

Sweat was eventually able to secure a total of $22,000 through two grants from the Intel Foundation, the company’s charitable organization for community development. The first grant totaled $5,000. With the sustainability element of the project in place, Sweat created a budget and applied for an additional $17,000 “Sustainability in Action” grant through Intel. Again, he received the funds.

“The first $5,000 wasn’t enough to cover all the costs,” says Sweat. Water costs alone would sink most of the budget. Plus they also would need the land, permits, an irrigation system, drip tape, someone to till the sunbaked soil, fertilizer, seeds, a winnower, an oil press, signage, and maybe a fence.

Valley of the Sunflowers

Picture it: two acres of six-foot-tall sunflowers with their big yellow faces leaning towards the sunlight as the sun drags across the sky, the flowers turning in unison like spectators at a slow motion tennis match. 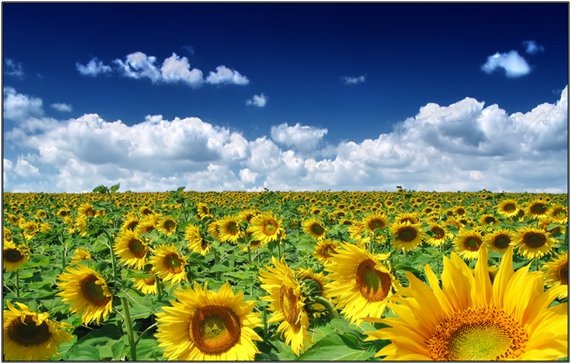 The City of Phoenix is supportive as well. Cindy Dach, Acting Executive Director of Roosevelt Row, CDC, says the city was tentative when first approached with the idea, but after some meetings City Hall caught the vision and fast tracked the project.

“We know the city is under the microscope for how it spends money. We came to them with the idea and the money to do this project,” she says.

The city wanted to start on four-acres but Sweat and Dach agreed that kind of square footage was too large for the initial project.

“We are going to learn about the soil conditions, how far apart to plant seeds, about water usage, about wind damage. The spring harvest will be better,” says Sweat.

The fall and spring are the only two seasons that Roosevelt Row will be responsible for the project. After the spring harvest the sunflowers could be completely removed, unless another person or organization wants to assume (temporary) responsibility for the project.

During these coming two seasons, community volunteers will be needed every step of the way.

“If someone has an oil press or a tractor, or can contribute time and resources, that would be awesome,” says Sweat.

A Facebook page has been created to keep the community informed with news and about the sunflower planting schedule. Those who wish to contribute will be able to do so through a Facebook Causes page and possibly through a soon to be launched Kickstarter grant.

In addition to the revitalization of downtown lots, this project furthers discussions with corporations and their role in supporting quality of life in the communities where they do business.

“The city can’t do everything. Businesses and people from the community need to make thing happen. We are at a tipping point in downtown Phoenix history,” says Dach. “This project could be done in a temporary way,” and when the time comes “there will always be places to move this project.”

In this story: grant, intel, valley