Refresh Your Brain With a Science Break 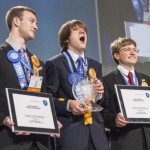 If you’re feeling the Thursday mental fatigue that comes near the end of the work week, give your tired synapses a pick-me-up at the world’s largest international pre-college science competition, and take a look at cutting-edge student research.

The Intel® International Science and Engineering Fair® (Intel ISEF) is a program of Society for Science & the Public, wrapping up this year’s event at the Phoenix Convention Center through Friday. Celebrate the joys of science at Thursday’s Public Outreach Day with hands-on interactive exhibits, and meet talented young finalists creating groundbreaking research in chemistry, computer science, engineering, and other disciplines.

Approximately 1,600 high school scientists competed from around the world, coming from 433 affiliate fairs and resulting in over 400 award-winning finalists and 17 “Best of Category” winners in fields including animal and plant sciences, cellular and molecular biology, behavioral and social sciences, medicine and health, bioengineering, and physics and astronomy.

The Special Awards Ceremony takes place Thursday evening, while the Grand Awards Ceremony starts Friday at 9AM. It’s intriguing to speculate on the prize-winning topics of research — finalists are competing for more than $4 million in awards. Last year’s first-place winner was 15-year-old Jack Andraka of Maryland, who created a simple dip-stick sensor to test for pancreatic cancer. Astonishingly, Andraka’s study resulted in greater than 90% accuracy, and showed his sensor to be 28 times faster, far less expensive, and more than 100 times more sensitive than current tests.

Curious? Learn more about past projects through the abstract search, or stop by the Fair and see for yourself — you might find research exploring new drugs made from spiderweb silk, or discover an internal combustion engine with only four moving parts…or you just might meet the next great scientific mind in a teenager.