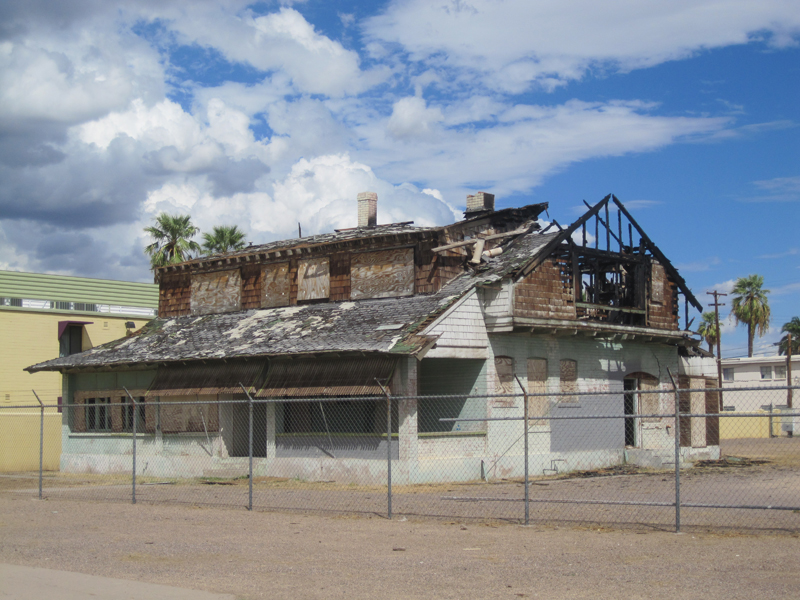 As a follow-up to the “Save the Knipe!” post, it is worth examining the actual history of the home — which is a shell of its former self — at 2nd and Portland streets. Nearly burnt to a crisp earlier this summer, the c. 1909 home does house some Phoenix historical significance beyond its 101-year age.

Leighton G. Knipe, the namesake and architect of the home, was notable in the early 20th century Phoenix building scene. He drew up plans for the town of Litchfield Park and its storied Wigwam Resort, but also engineered the Jefferson Hotel, Tempe City Hall and several buildings on ASU’s Tempe campus. Knipe built the home on 2nd Street for his parents, but he moved in and officed soon after its completion.

The Knipe House is now a weathered beacon of north Evans Churchill — this part of the neighborhood north of Roosevelt Street has been mostly demolished over the years for projects that failed to take off or to simply eliminate blight. What you see now is the Knipe House surrounded by dirt, dirt and more dirt. It is one of the few historical remains of this Central Phoenix neighborhood, and it was in dire shape well before its alleged arson (it recently appeared on the Phoenix Historic Neighborhood Coalition’s Most EnDangered Dozen Historic Places List).

As of today, the second floor, which featured a damaged original wooden roof, is virtually gone, exposing the home to the elements. A brick chimney protruding from the rubbled second floor is the remnant of a wood-burning stove the was in the ground-floor kitchen. The sleeping porch, though in bad shape, has survived, and the foundation and support walls are still in decent shape.

The September 20, 2010 meeting before the City of Phoenix Historic Preservation Commission revealed architect Bob Graham’s conclusions on the building, confirming that is still indeed worth saving and possible to save. The fire damage alone will cost an estimated $150,000 to repair. Much more discussion will follow, as well as the result of the building’s insurance claim in the coming weeks and months. For now, let the City of Phoenix Historic Preservation Commission and the Evans Churchill Community Association know that you want the Knipe House to be refurbished. Stay tuned to DPJ for further word on these developments.