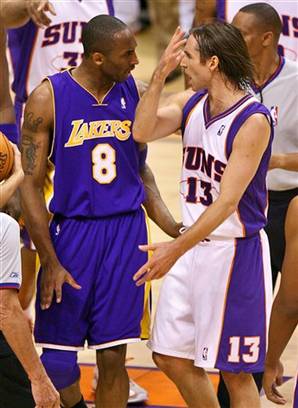 The rivalry is about to be renewed.

Someone should let Bill Plaschke over at the Los Angeles Times know that the Suns are a completely different team than the Utah Jazz. Mr. Paschke claims the Suns have no chance at beating the Lakers. He came to this conclusion not based on what the Suns can do, but based on what he saw the Lakers do to the Jazz. Apparently, the Lakers closing the Jazz out at home has left the Suns afraid to play the Lakers.

Plaschke must not have seen the Suns blow out the Jazz on their home court to end the regular season. That’s right, Bill, the Lakers aren’t the first team to win in Utah.

Plaschke doesn’t understand that the Suns are a far better offensive team than the Jazz. If the Jazz managed to put up 102 points per game on the mighty Lakers defense, imagine what the Suns will be able to do. The expected return of Robin Lopez means Lakers forward Pau Gasol is going to have to guard Amar’e Stoudemire the majority of the time. Everyone talks about how tall Gasol is, but nobody talks about how soft he is. If Gasol guards Amar’e one-on-on, Amar’e will rip him apart. If Lakers center Andrew Bynum comes to double on STAT, he will find Lopez.

Plaschke doesn’t take into account that the Suns are a healthy team. The Lakers just beat up on a Jazz team playing with half of Andre Kirilenko and no Mehmet Okur. LA should have taken care of Utah like Orlando dumped Atlanta, but they didn’t. Utah was in every game. Sure, the Lakers swept, but it wasn’t really that impressive.

Plaschke seemed to forget that the Suns have a bench. Guys like Jared Dudley and Channing Frye come off the Suns bench. I’d say those guys are a whole heck of a lot better than Jazz starters Wes Matthews and C.J. Miles.

Plaschke doesn’t realize that length doesn’t equal talent. Yes, the Lakers are tall, but how good are their bigs? Sure, Gasol will show up offensively, but he’s a weak defender. Bynum is big but is highly inconsistent and will have an equally big body in Lopez to deal with. Lamar Odom shows up about half the time and makes dumb plays on a regular basis. The Lakers can have their tall bigs, I’ll take the Suns’ talented bigs.

Someone should let Bill Plaschke know the Suns will steal one of the first two in Los Angeles and close this series out in six.

Spots to watch the Suns

Couldn’t get your hands on those elusive Game 3 and 4 tickets? There are plenty of spots to watch the Suns around Downtown Phoenix.