If you’ve ever had breakfast at Over Easy or its reincarnation inside Scottsdale’s Alltel Ice Den, you know chef Aaron May can succeed in a small space just as well as he can in much larger rooms like Old Town’s newest hot spot, Mabel’s on Main.

May is one of Scottsdale’s most prolific and well-recognized chefs, burly and bearded, his shoulder-length hair sometimes up, sometimes down. Though he’s had the eastern half of the Valley covered for some time, he has quietly been surveying the Downtown Phoenix culinary landscape for years, and he’s about to move in.

“My partner, Quinn Goldsberry, and I have been looking Downtown for a long time,” May confesses. “The thing about Downtown is, do you go to the Camelback and Central corridor? Do you go to Roosevelt Row? Or do you just jump in Downtown near Hanny’s — really downtown Downtown?”

Later this year, May will introduce two new cozy dining concepts to Downtown Phoenix in the forthcoming CityScape development, but don’t think that he’s simply waiting around to be handed the keys. May operates a handful of restaurants now, and he’s prepping for the upcoming Devoured Culinary Classic at the Phoenix Art Museum on March 13. He’ll be offering a demonstration that afternoon, and it promises to be a bit different than most. 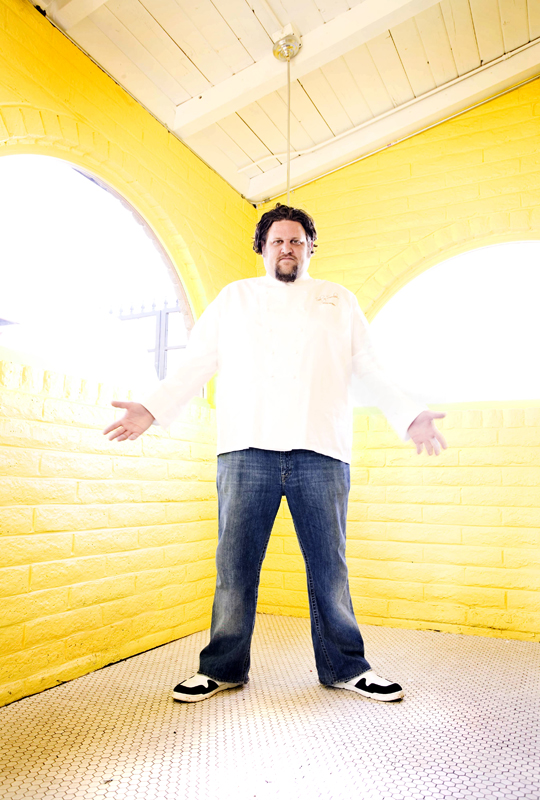 Aaron May inside Over Easy

“The demo is in partnership with Fiji water, so I would say it will be liquid in nature,” May hints. “I don’t have it nailed down, but it’s going to be really creative and exciting — to fit in with the whole Art Museum theme.

“I think the Art Museum is just a great space to have a culinary event,” May continues. “With the art and the beautiful building and the gardens, it just lends itself well to the culinary arts — the food, the wine, the expression — it’s the perfect space.”

And, despite usually working behind closed doors, May is cool with the idea of cooking for a crowd.

“It gives me a chance to express what I do on a real personal level,” he says. “It lets people see what goes into creating what I make. It’s not stressful — everyone there is excited to see it. You’re there doing what you do every day for people who are interested.”

Devoured is just one piece of the Downtown culinary puzzle for May. He’s a Downtown fan, and clearly, just from listening to him speak about all the fare possibilities Downtown, he feels Phoenix is already on the culinary map.

May will host two restaurants in CityScape’s first phase. Both of the rooms, one on top of the other, are intimate spaces, but that doesn’t mean the experience won’t be much more expansive.

As May waits for construction of CityScape’s first phase to finish up, he’s eagerly preparing for the two restaurants, which certainly takes a good amount of studying. The first space, on the ground level, is a Tokyo-style ramen bar that has May really eager to bring a different concept to Phoenix.

“It’s really small — around 900 square feet,” May laughs. “I lived in New York and San Francisco, and they have all these great ramen bars. We don’t get that in Phoenix much. We’re doing handmade noodles; that really cool noodle culture of Tokyo.”

May will jet to Tokyo soon to study up on some cooking techniques and jot down ideas, and he’s hoping inspiration for the restaurant’s name will find him there.

“We refer to it as ‘Ramen Bar’ right now. Who knows, Ramen Bar may be [the final name],” he chuckles.

The second concept, directly above the noodle bar on the second level, is a Mexico City-style tacos ‘n tequila joint. At 2,500 square feet, it’s a bit bigger, but still tiny compared to some of May’s other ventures.

“If you think about it, Over Easy (which occupies an old Taco Bell) is bigger than the ramen bar, and all the other restaurants I have are bigger than this bigger space,” May says. “I think the small space is awesome — we can really set an intimate atmosphere. I love the juxtaposition of going to this 900-square-foot noodle bar and then going to the giant arena, convention center, office building, whatever. Everything is on a grand scale Downtown, and then there’s these two little restaurants.”

He’s not totally set on a name for the second space, either, but a working title sounds promising.

“Right now we’re calling the Mexican restaurant ‘Vitamina T,’ which means ‘Vitamin T,’ May reveals. “They talk about it in Mexico City all the time: ‘Have you gotten your daily ration of tacos, tequila, tamales, tortas?’”

Though an opening date hasn’t been set for either just yet, May expects to start working on the spaces in early spring, and his turnaround time is usually very quick.

May’s restaurants are scattered northeast of Downtown — Old Town Scottsdale, Arcadia and DC Ranch — but he feels a real sense of anticipation about Downtown that he doesn’t get in other parts of the Valley.

“I’m friendly with all the chefs [at nearby restaurants] and respect what they do,” May says. “When CityScape came about, it just seemed like a great opportunity. There’s a lot going on: Sam Fox is doing his Beverly Hills-style steakhouse, and that should draw a lot of people; you have all the office space; you have Press Coffee, the Improv — all this synergy. It created this natural spark and totally made sense to go there.”

Currently, May bounces between his East Valley eateries and his future Downtown spots, typically visiting the city core three or four times a week.

“Just walking around that area where CityScape is going, you see the Luhrs Tower and all the cool stuff around there,” May says. “When I walk around, I just get so excited about the prospect of being able to cook right there.”

But, perhaps most importantly, May doesn’t just head Downtown for business. He’s interested in connecting with other local chefs and sampling their fare.

“I’m a big fan of Downtown Phoenix,” he gushes. “I try and support Downtown, whether I go to Local Breeze for lunch or Nine|05 or Sens or PastaBAR at night. Then there’s Hanny’s, which I love. I think that’s one of the coolest restaurant designs ever. In terms of culinary growth, there’s great stuff there. There is a restaurateur culture down here. There’s no corporate culture to the restaurants, and I hope it stays that way — local, independent guys.”

In the Know: Devoured