The number of coffee shops in or around Downtown Phoenix has noticeably increased in the past few years. The rising competition not only leaves patrons wondering if Phoenix might become a major coffee town, but also has business owners scratching their heads to come up with ways to drive business.

Open mic nights are expected, and jazz nights are better saved for ill-lit bars. Even spoken word or poetry readings have become a staple at many coffee establishments.

But Scrabble? That’s where Urban Beans comes in.

This Midtown shop, trying to find a niche since opening last fall, has opted to shake up the traditional brand of coffee shop activities. Monday night is Scrabble night at Urban Beans. Owners Virginia Senior and Kim Cristoff have been longtime recreational Scrabble players with their circle of friends, and the ritual has become a staple in the weekly events calendar at their business.

“We just love playing Scrabble when we’re together,” Senior says. “You have an opportunity to play off of everyone else. The Scrabble board is the result of a group. There’s a way to play offensively or there’s a way to open up the board and let people play off each other.”

Senior says the Scrabble night is indicative of the type of vibe Urban Beans strives to promote. 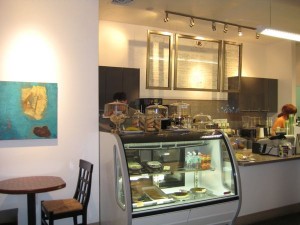 Spell out the magic word on your Scrabble board and you may win something from the pastry case.

“We’re about building community,” she says. “This building is one of our projects. It’s a new economy, a new time, a new age. People want to do the things they did two years ago for less money.”

Games are free to join, and though Urban Beans provides boards, patrons are welcome to bring their own. The games typically start at 7 p.m. and often last until the shop closes at 10 p.m.

“It’s a symbiotic relationship with the neighborhood. It’s a gathering,” Senior adds.

To encourage neighbors to join in, Urban Beans offers incentives for those who play. Spell “coffee” in a game and you’ll get a free coffee. The same goes for certain pastries and other menu items, depending on the staff’s discretion.

“We’re trying to boost up the night and it’s really had an effect, in my opinion,” says barista Perry Czopp. “There’s a lot of laughing, or screaming at times. It gets pretty competitive.”

The tradition started about three years ago when the group of friends went to Mexico for New Year’s Eve. When they returned to the States the games continued, and the group would meet up once a week at someone’s house to play.

The game moved to Urban Beans when the shop opened as a way to keep the group together and help Senior’s business.

“It gave us a place to play and a way to support her,” says Rachel Gesterle, a friend of the owners. “It gives us an excuse to get together.”