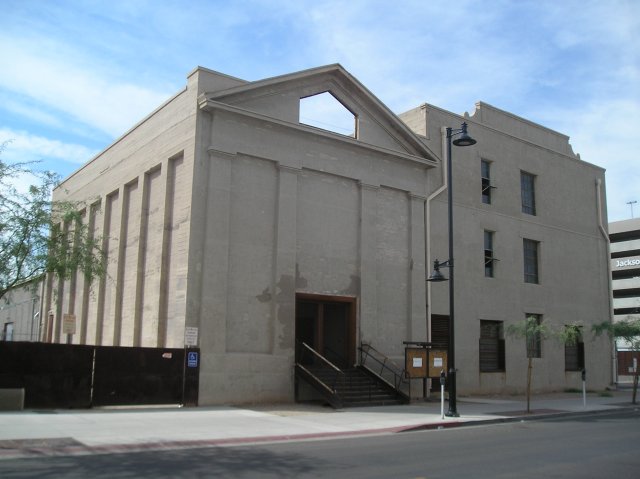 If you’ve ever stepped foot in the Icehouse, you know it’s a relic from the Phoenix of old. The open cathedral entrance, grandiose in scheme, depicts the kind of early 20th century architecture that is rare form for Phoenix. Constructed in 1910, the building was first known as the Constable Ice Storage building (hence the name it was rechristened most recently).

The loading dock of the building, now a functional outdoor space for filming and photo shoots, was the original loading point for trains and trucks transporting produce heading east. The site manufactured 300-pound blocks of ice, used to keep the mobile storage units cool. Jackson Street, right on the tracks, was the perfect location for such a facility.

The building itself, broken up into several warehouse-sized rooms, is made of reinforced concrete. The pedimented temple front entrance (now known as the Cathedral Room), facing Jackson Street, is indeed part of the original structure. The structural piers on 4th Avenue remain in excellent condition. The building, converted for different uses over and over, retains its shell, which turns 100 this year.

Though it was used for years as a storage facility for the Phoenix Police Department, it has been a transitional arts space since 1990. Hardly turnkey, the building is purposefully intended to be a blank canvas for artists, performers and clients to create their own vision.

In this story: Downtown Phoenix, From the Arizona Room, Historic Buildings, the Icehouse