In Case You Missed it: Downtown Voices Visioning Conference Speech

Below is the transcript of Steve Weiss’ speech at the opening of the Downtown Voices Coalition‘s Visioning Conference on January 15, 2010 at the Matador Mexican Restaurant.

You know, Downtown Voices was formed in a place just like this. As a matter of fact, if the Matador bar wanted to, they could create a new drink called the DVC. All you need is a shot of good tequila and a signature on an article of incorporation!

What some may not realize is that Downtown Voices Coalition was the culmination of a chain of events that began with a move to bring a pro football stadium to downtown. As the art folks and small business owners got wind of the plan, they felt their work to make a new and interesting arts district was going to suffer with a giant stadium plunked in its center. Though the protests didn’t stop the demolition and razing of the Evans Churchill neighborhood by speculators and the City, it did manage to shine a light on the project, and successfully persuade the city officials to put the idea aside.

For the first time, artists and small business folks started talking to each other. Then, the Jerde Project, a big box mall development, was floated as another direction for downtown. Ideas were being discussed for another ASU campus, and suddenly the University began as a player in the fate of the downtown community. The fledgling organization known as D-PAC, the Downtown Phoenix Arts Coalition, felt now was the time to get the other voices heard, ones that didn’t have political power or an outstretched hand looking for tax incentives and variances.

The result was an event singular in the City’s history: A one-day facilitated discussion at the Icehouse of over 80 downtown stakeholders, to determine what WE as a group wanted for the future of downtown Phoenix. The resulting report created from the discussion was titled “Downtown Voices: Creating a Sustainable Downtown”. It was not only presented to the City of Phoenix, but also found its way into many of the aspects of the newly created Downtown Strategic Plan.

On that day, when we all met and talked, new relationships were formed.

Artists, business owners, developers and, yes, even city officials began to realize that the ultimate goal of the downtown stakeholders were actually very similar.

However, as the dust began to settle from the good work done, development projects in once untouched and unwanted areas began to rise. We as stakeholders learned how zoning by variance and self-imposed hardships could dramatically change the development rulebook.

A key group of stakeholders, coming from different backgrounds yet tied together with similar concerns, realized it would be beneficial to speak with one voice, the voice of what became the Downtown Voices Coalition. We met with a lawyer at the old Ramada Inn downtown bar, and with a toast, began our first mission and organization.

Negotiating a better project for the Summit at Copper Square became our first test, and as we created our organization’s by-laws and elected officers, we found direction from that initial Downtown Voices document.

It was a boom time, and it seemed many times we were playing Whack-A-Mole, that great carnival game where hitting one pop-up mole only made another rise. We found ourselves as a group both welcomed and disparaged. The tactics of “Agitate, Negotiate and, when all else fails, Litigate” brought us through a series of events with many successes and some sad losses.

A Tibetan Buddhist Lama, whom when asked at a conference the definition Buddhism, replied “Divine Common Sense”.

In each book, the over-arching view expressed that people as a common goal ultimately desire happiness above all else.

As I’ve worked with this group of fellow DVC members, I’ve come to realize that each member seeks the same thing: Happiness in their lives and in their community. There isn’t one member of DVC who wouldn’t want happiness above all other things. The desire is a better place to live, a better place to create sustainable businesses and a genuine dedication to staying here and making it a great city for all of us.

An example of how different this sentiment can be expressed was in one particular issue, when a proposed out of scale development’s lawyer declared in front of City Council that he’d “never dealt with people who didn’t want to raise their property values.”

The truth is, we represent people who aren’t moving toward the next buck or the next city, to which it’s more important to raise living values than financial values.

Since 2004, new blood with new ideas have entered the downtown picture. Individuals are drawn to the small-town feel of the 5th Largest City in the Nation, great small businesses have enhanced neighborhoods, partners have been found in thoughtful development and the ASU Downtown campus is showing signs of like-minded goals for that sustainable, cool and enhanced downtown where we all will happily live, work and recreate.

In these circumstances of a down-turned economy, it seems appropriate to take a breath, reflect a bit on the past, but, most important, look Forward.

What is the City that we hope for?

What have we achieved and what can we improve?

How can we get more voices to speak as Downtown Voices so that together we can create that happiness we all desire?

These are tomorrow’s questions, and the facilitated discussion we begin at 10 am tomorrow at the A.E. England building at OUR Downtown Civic Space will help to provide some answers.

I toast the future. To the City of Phoenix! 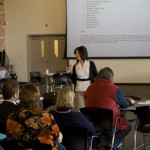 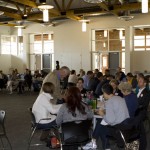 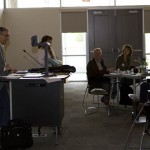 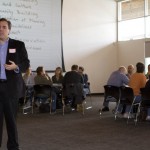 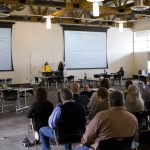 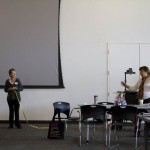