Prior to September 28’s official opening to the public, Uptown’s newest eatery, Hula’s Modern Tiki, quietly opened its doors the previous evening to invited friends, family, as well as certain industry and media types. Twas a humble affair, however — one helping to properly introduce the eagerly anticipated restaurant to its new environment.

Located in the circa-1960s shopping plaza at the northwestern corner of Central and Highland avenues, the entirely overhauled, standalone A-frame structure houses the latest high-profile addition to the neighborhood’s growing roster of unique dining establishments to materialize within the past year.

The restaurant is the brainchild of Chris and Craig Delaney, co-owners of the original Hula’s locations in California, and their enthusiastic new partner, Phoenix-based Dana Mule. Surgically aiming for a unique, urban aesthetic equally tied to the original Hula’s Tiki-inspired restaurants in California as it is to Phoenix’s own mid-century heritage, Hula’s Modern Tiki is a union of varied reference points both local and abroad. Think Trader Vic’s with less theme, easily more approachable (read: price and atmosphere) and, obviously, more directly associated with its respective location’s vibe and history geographically.

Structurally, the focal point of the once-dated, innately odd building is the large floor-to-ceiling hexagonal picture window abutting Central Avenue. This portal not only anchors the primary bar area from the inside, but it also provides patrons an intangible, ever-changing connection to the urban environment that exists just outside of it. The remainder of the interior dining area is clean and well designed, with wood-paneled walls interplaying with those stark white. Minimal touches accessorize, like oversized framed photographs depicting a bygone mid-century lifestyle, as well as recessed shelving for colorful collections of tiki mugs and other related knickknacks.

Besides the additional interior dining square footage, a major part of the structure’s expansion beyond its original A-frame is the large patio. During pleasant weather, both the new indoor and outdoor dining spaces, along with the main bar area, become unified courtesy of several large rolling, garage-like glass doors.

The menu itself presents a conflux of items revolving around the seed of “modern island fare.” This loosely translates to influences Polynesian, Hawaiian, as well as various incarnations of Asian and Latin. Though not overwhelmingly so, a large dominance of seafood exists. Pupus (appetizers) of note: crispy coconut shrimp rolls, with a pineapple-horseradish sauce for dipping ($7); and poke, a tossing of high-grade ahi with avocado, onions, soy sauce, sesame oil and crushed macadamia nuts ($9).

Main courses explore the gamut from inspired tacos combinations, to specialty dishes involving pork, fish and chicken. Some highlights sampled: “wasabi fish special,” a thin steak of seared tuna served atop wasabi mashed potatoes and layered with an equally wasabi-fied cream sauce ($17); and a house specialty, Duke’s Luau Pork Plate — a healthy stack of tangy, smoky pulled BBQ pork and pineapple, served alongside a nutty mixture of brown and white rice, and yes, a little coleslaw ($14). Then finally, for dessert, there exists limited but perfectly thoughtful options (all $6). Of them, notably, a very appropriate key lime pie, as well as a sweet butterscotch pudding, crowned with slices of caramelized bananas and mangoes.

Never to be outshone, of course, there is an extensive menu of island-bearing cocktails, completing (or beginning?) the establishment’s perfectly pitched tiki theme. From mai tais and mojitos, to zombies and hurricanes, any desires to drink your way through the South Pacific prove easily attainable — an impulse made even more perfect with the addition of vintage surf films playing on flat-screen televisions (and vaulted projector screens) in the bar and lounge area for added entertainment.

Presenting a snazzy, reinvented example of an older mid-century aesthetic, Hula’s Modern Tiki in Uptown is a welcome addition to not only the neighborhood, but also the entire city. 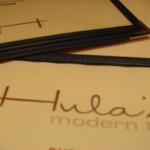 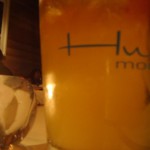 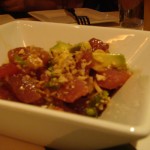 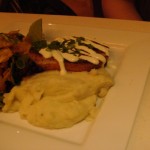 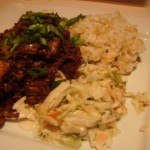 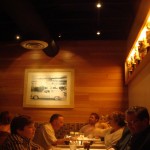 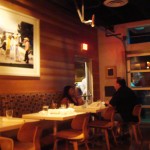 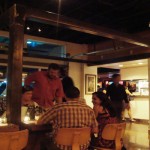 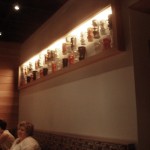 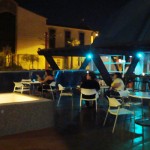 All photos by Justin Lee