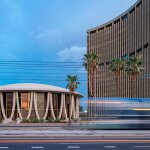 Wire*— Beadle, Henry, and now, Sarmiento. Upward Projects portfolio of real estate, stacked with buildings from some of the most prolific mid century architects, will add yet another architectural unicorn to its mix with the lease of the Sarmiento-designed Phoenix Financial Center rotunda that will house their new HQ in February 2019.

The Phoenix-based restaurant hospitality company has secured the space, and will begin restoration and renovations this fall. Located on the grounds of the 1960-era Phoenix Financial Center (3443 N. Central Ave.), Upward Projects’ new 30-person HQ (with plans to expand to 50 people in the next few years) will be housed inside the northernmost rotunda.

The new HQ will allow Upward Projects, which was founded in Phoenix in 2009 and annually named to the “Inc. 5000” list as one of the nation’s fastest-growing companies, to develop and manage all aspects of their business including eight Postino WineCafé locations across Arizona, Colorado and Texas, two locations of Joyride Taco House, Windsor & Churn and Federal Pizza. Originally designed by modernist architect, W. A. Sarmiento in 1964, Upward Projects’ co-founder and CEO, Lauren Bailey has long had her eye on the Phoenix Financial Center and its striking twin rotunda spaces.

“I called my friend, Joe Herzog of Shepley Bulfinch [the architecture firm that recently restored and moved into the south building] and told him that I’ve always loved his space, and in a stroke of serendipity, it was becoming available in the fall. Starting with the first-ever Postino inside the former Arcadia post office, Upward Projects is built on a foundation of revitalizing historic and architecturally significant spaces, so the Phoenix Financial Center is the perfect retro-modern home for our team to work in a creative, inspiring environment.”

According to local architecture expert, Alison King of Modern Phoenix, “Upward Projects has been leading the charge in adaptive reuse of Phoenix’s midcentury stock. In the age of teardown culture, their investment in rehabilitation of underutilized spaces is nothing short of astonishing. They’re inspiring new generations to look twice at their surroundings and treasure authentic experiences while we eat, drink, work, and live with people we love.”

King goes on to say, “I’m often asked what my favorite midcentury modern building in Phoenix is. After much deliberation (which is like having to name a favorite child) my answer always remains Phoenix Financial Center.”

“We’re not sure what exactly we’ll do with the basement,” Bailey says. “The possibilities are endless. But we did run a poll on Instagram and the top vote getter was to install a roller rink.”