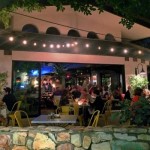 After spending the summer in climate controlled conditions, 100 percent of Phoenicians agree: Must. Go. Outside.

Now that temperatures have started to cool, spending time indoors can feel like a cardinal sin, but thanks to a group of local restaurateurs with a vision for bringing the outside in, Valley diners can enjoy the best of both worlds guilt free. Some Valley diners may not be familiar with the Upward Projects name, but they’ve more than likely been to at least one their restaurants. Postino WineCafe, Windsor, Joyride Taco House, Federal Pizza and an ice cream parlor, Churn, are the restaurants that Upward Projects has added to their portfolio.

With a total of eight restaurants across the Valley, Upward Projects has made an undeniably positive impact on the area’s food scene and community.

And while the menus are consistently craveworthy (one word: bruschetta), and their interiors stylish, what makes an Upward Projects restaurant unique is the intentional approach of blending the indoor and outdoor dining experience.

“The outside is probably one of first things we think about,” said Upward Projects Founding Partner Craig DeMarco. “We’re always thinking of how to bring the outside in.”

Four of Upward Projects’ restaurants are located along Central Avenue north of Camelback in the Uptown District. When visiting the restaurants, which are within a minute’s walking distance of each other, DeMarco’s approach becomes apparent.

“We’ve committed the same amount of energy to the patio as we have to the inside,” DeMarco said.

Each of the restaurants—Postino, Windsor, Joyride Taco House and Federal Pizza—feature large patios with lush green plants and ambient lights strung from above. Of varying sizes and shapes, there is little consistency between the plants other than their hue, which adds an element of intrigue to the outdoor spaces. The patios at Postino and Windsor are especially enjoyable. Both are surrounded by green leafy vines, established shade trees, and large planters of succulents and cacti.

“We want to feel the green leafy experience,” said Lauren Bailey, Upwards Projects founding member. Bailey added, jokingly, that the 1992 film “FernGully: The Last Rainforest” is part of their inspiration.

“The more trees the better,” she said.

COMMUNITY, EXPERIENCE & CONNECTION
As the patio at Postino on Central catches your eye from a distance, it’s almost like looking onto a park. The sense of community can be felt in the pockets of people buzzing with conversation, tucked between clusters of plants.

The feel of the space has a flow as natural as the conversation. It’s as if it was designed for a community experience, not simply to go through the motions, then eat and leave. Rather than people having to adapt to the space, the space is designed with people in mind. In an effort to meet the needs of customers, Bailey says that the patio at Postino has evolved over time. And while they certainly aim for the best possible use of the adapted spaces, Bailey and the Upward Projects team aren’t afraid to remodel and tweak if they don’t think they’ve “nailed it.”

“We don’t know from the beginning how (the spaces) will be used,” Bailey said. “We go back and are constantly making changes to make the experience better.”

Contrary to the current trend of long community-style seating tables, Upward Projects uses smaller two- and four-top tables, which allow for more personal connection. According to DeMarco, people are looking for more of an intimate space and dining experience.

And in a world that’s increasingly dependent on technology, DeMarco said their “big hope” is to help people to create meaningful connections and experiences.

DINING IN & LOOKING OUT
Another design feature that DeMarco and Bailey have consciously integrated into their projects is the use of large—often floor to ceiling—window panels. A light and airy feel is arguably a key signature of all of their restaurants.

During the summer months, the glass walls can remain closed to hold off the heat while still allowing diners to enjoy the exterior sunbathed landscape.

Come fall, at Joyride for example, the window panels can be rolled open to create a seamless transition between the restaurant’s hip interior and the light trimmed patio along Central Avenue to the east.

Similarly, Windsor boasts large glass rolling doors that blend the indoor space with the cozy patio. Like the others, Windsor’s patio is designed to be enjoyed year-round. With its rustic yet refined aesthetic, the patio is equipped with obligatory misters for summer, and is also home to a mid-century red fireplace. This faded vintage find adds a welcome warmth and enhances the cozy atmosphere in the winter. LOOKING UPWARD & FORWARD
With eight restaurants across the Valley and two more on the way, it’s clear that Upward Projects is onto something good.

Fourteen years after they got their start renovating an old post office in Arcadia which became the home of the Valley’s first Postino WineCafe, the Upward empire continues to grow.

Earlier this year, the first out-of-state Postino WineCafe opened its doors in Denver, Colorado, and the wine cafe will also open two locations in Scottsdale by spring 2016.

When everything they touch seems to turn to gold, it’s hard to imagine how Upward Projects could top their already solid success.

But they have another gem in store.

“It’s one of our crown jewels in restoration,” said Bailey of the first future Scottsdale location of Postino WineCafe. She and her husband found the building about five years ago and immediately fell in love. She recalled standing on the patio of the midcentury building with her husband and calling Craig’s wife, Kris DeMarco, who is also part of the Upward team.

“I said, ‘This is amazing,’ and I set the intention,” Bailey said.

Sure enough, the opportunity to purchase the property came around.

“It’s going to have the best patio in the company,” Bailey said.