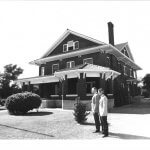 The leader of the Frank Lloyd Wright Foundation believes the best way to preserve a historic home is to make it a living legacy to the values of those who created it. Stuart Graff, a corporate lawyer who is president and chief executive officer of the foundation and whose lifelong passion is historic preservation, came to the Arizona Humanities home, the historic Ellis-Shackelford House, recently to discuss the best ways to present historic homes for public education.

Too many house museums “only focus on the past and are disconnected from the future,” Graff says, noting that he “hates” these types of historic museums. “They are about the dead.”

Paradoxically, these museums intend to preserve the life of an important person or event that happened there, but the way they do it ensures nothing significant will happen there ever again, Graff notes.

Graff encouraged the audience at the historic home, located at 1242 N. Central Ave., in the former Millionaire’s Row area of Phoenix, to consider not only the architectural features of the home built in 1917, but also the life lived by its owner, Dr. William Ellis, a founder of the hospital that would become Good Samaritan hospital and the city of Phoenix’s office of sanitation. A key question of any house museum that should be asked, he suggests, is “What is the story the building has to tell you?”

A building can tell you this without a lot of interpretation by others, Graff argues. And “a museum that doesn’t change minds isn’t serving its purpose,” he says. “When it’s realizing its mission, your experience of the world should be different.”

Civic leaders, such as the Elks and other groups, gathered at the Ellis house to discuss ways to improve their community and make connections, Graff notes, pointing out that the Arizona Humanities continues those traditions today.

Graff believes every time a conversation happens in the Ellis-Shackelford House, it’s an opportunity to reflect on the story of its owner’s passion for his community. “These places matter,” he adds.

“Do you see this house differently now?” he asks the packed house filled with chairs of people, many of whom raised their hands to say that they had often visited historic house museums, including Wright’s homes here and nationwide. Sally and Ellis Shackelford, 1953. Courtesy of The Shackelford Family.

The Ellis-Shackelford House, like many modernist homes, lacks a lot of ornamentation in its design, but had many forward-looking features such as the first evaporative cooler, the precursor to air conditioning, in the area, Graff pointed out.

Just as Dr. Ellis’s family moved to Arizona from Ohio due to a family member’s tuberculosis illness, Frank Lloyd Wright came to the state in 1930s because he suffered from an illness and thought the desert would improve his health., Graff says.

Taliesin West, the historic home Wright built in Scottsdale, was built to look like it grew out of the desert and was bound to the land. Today, it’s the main campus of the School of Architecture at Taliesin, where students practice Wright’s philosophy of learning architecture by doing it, Graff says.

Graff brightened as he talked passionately about Wright’s experimental architecture that pushed limits and took risks, using materials on hand to create unconventional structures with spectacular views, citing his homes in Oak Park, Illinois, as well as Arizona.

Graff says people often judge Wright’s choices by contemporary standards, questioning a large water pool standing outside Taliesin West, but what they don’t know is that the pool was the Fire Department of the time, when the city of Scottsdale was far away and the architect had previously lost many structures to fire in the past. Today, uninformed observers just think he wasn’t being sustainable, he notes. Graff says those like himself who help maintain and preserve Wright’s homes and architectural philosophy for future generations don’t want to just limit the story to the architect’s life because “Wright spent no time in the rearview mirror” and “we have to tell the bigger story.”

By restoring Taliesin’s original fabric roofs, allowing people to stand in rooms and see the amazing desert views in them “to experience beauty” and the breezes in breezeways, it can revive the spirit of its creator in touring visitors, Graff says.

Graff compares a well-designed and preserved historic house museum to the beating heart of the owner who built it. As anyone who listened to Graff’s impassioned lecture on Wright’s home and the Ellis-Shackelford House, it’s obvious his heart is dedicated to spreading a love for these structures that are often overlooked and devalued.