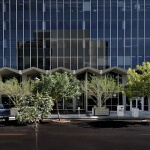 CBRE and ViaWest Group have announced that Fin, a virtual assistant company, has signed an 8,081-square-foot lease in The Monroe located at 111 W. Monroe Street in Phoenix. This will be the San Francisco-based company’s second location and first in Arizona. Fin will occupy a spec-suite space that will be completed later this year.

Bryan Taute and Charle von Arentschildt with CBRE’s Phoenix office represented the landlord, ViaWest Group, which purchased and rebranded the property in May 2017. Ryan Bartos of JLL represented the tenant. “Fin’s lease announcement reaffirms the growing demand of tech tenants looking to locate in downtown Phoenix,” said CBRE’s Taute. “Their spec-suite pre-lease further highlights the demand for built-out, modern, move-in ready office space. We hope to capture that demand with a range of spec suites being delivered in December.”

In December, ViaWest will complete a variety of additional spec suites ranging in size from 1,500 square feet to a full floor at 14,719 square feet. Two contiguous spec suites on the fourth and fifth floors will offer 21,208 square feet of combined office space with an available private rooftop patio.

“With the addition of Fin to an already exciting tenant roster, The Monroe is shaping up to be an unmatched destination for innovative startups in the heart of downtown Phoenix,” said ViaWest’s Founding Partner, Steven Schwarz. “This continued momentum marks another turning point for The Monroe as it continues to meet the needs of today’s emerging businesses.”