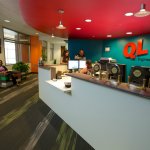 Quicken Loans, the nation’s second largest retail mortgage lender, today announced a long-term lease to occupy 150,000 square feet on six floors of the One North Central Building in the heart of the budding tech-hub in downtown Phoenix. The company’s relocation of 1,100+ full-time team members from its current office space in Scottsdale, Arizona is expected to be completed in 2018. “Over the past 10 years, we have built our Arizona presence from the ground-up and we now have a hard-working team that is passionate about both their clients and community,” said Jay Farner, Chief Executive Officer of Quicken Loans. “Having an office in an urban center is incredibly important to us as a company. It is our firm belief that vibrant downtown areas not only attract the best talent, but help companies innovate and flourish.” With the move to downtown Phoenix, the Quicken Loans Arizona office now joins more than 20,000 team members from Quicken Loans and its affiliates in two other downtown offices in Detroit and Cleveland – all operating in the heart of growing urban cores. Downtown office locations allow the Quicken Loans Family of Companies to grow its ‘for more than profit’ model – capitalizing on business success to create jobs, invest in the community and positively impact the bottom line of the cities in which it has a presence.

“When talking to team members, it’s clear that they are energized by being in a high-tech corridor that spurs creativity and innovation. Quicken Loans wouldn’t be what it is now if we were still in the suburbs of Detroit, and moving to downtown Phoenix will provide an energy boost to both our office and the city itself,” added Farner.

The Quicken Loans Arizona web center opened in 2007 with 90 team members. It has since grown to a workforce of more than 1,100 team members. The One North Central Building will have an interior created with an open style to encourage collaboration among team members and will feature an amenities-centric landscape with unique, contemporary furniture.

The new space is being planned, designed and furnished by dPOP!, a Detroit-based design company, that is part of the Quicken Loans family of companies.

In this story: Jay Farner, One North Central, Quicken Loans