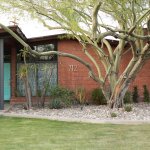 Frank Austin only purchased the home at 712 W. Vernon last October, but his enthusiasm and appreciation for its Midcentury Modern architecture would make the home’s influential original designer and owner proud. Designed and built in 1951 by Frederick P. Weaver as his family home, the Encanto Vista Historic District gem will be showcased in all its remodeled glory at the Modern Phoenix Home Tour 2017 Sunday, April 2.

Weaver, a co-founder of the firm now known as DWL Architects + Planners Inc, is credited with improving the Arizona architecture scene in the 1950s and 1960s before his untimely death in 1968. He also proved instrumental in forming the City of Phoenix Planning Commission, as well as being an influential leader of the AIA and other local organizations. A few of the other Phoenix area landmarks he designed include St. Agnes Church, Phoenix Sky Harbor Terminal 2, and ASU Hayden Library and Mall system.

Austin, who relocated to Phoenix several years ago from Los Angeles, feels fortunate “to own a piece of the history built in this style.”

Midcentury Modern homes are best known for the use of post and beam design, explains Sean Warfield, a design architect with DWL Architects. That style of design is in contrast to the typical large bulky walls used in homes. Instead, this style includes walls of glass that let ample light into the open floor plan, he adds. Warfield isn’t surprised that Austin and others see the charm of this architectural style. “I think people like to simplify their lives,” he explains. “The Midcentury Modern home gives them a house with clean lines, uses raw materials, and I feel it’s very relevant, fresh, and innovative to what people want in today’s homes.”

As an enthusiast of the Midcentury Modern style, Austin had looked at many homes of the era in Phoenix before he purchased Weaver’s, but he felt none had the same kind of architectural flair.

The beautiful tongue-in-groove woodwork in the slanted, vaulted ceiling living room and the wood detail at the front of the 2,400 square foot brick facade home really hooked him, though the prior owner hadn’t properly maintained it.

“I walked into this place and I said, ‘Ah, it needs so much work, but it’s beautiful,” Austin explains. He invested about $100,000 into repairs that included plumbing, HVAC, and mechanical issues as well as re-piping the gas fireplace, installing new kitchen cabinetry and stripping and sanding all the impressive woodwork. The remodel was completed last February. The entryway is wide open, with original walls torn down in the early 2000s to showcase the woodwork in the living room and the red brickwork. The home offers four bedrooms, which include a master bedroom, two guest rooms, and what Austin has converted into a den/home office. Both the master bedroom and the office look out on the backyard pool with its distinctive blue tile.

The two bathrooms each feature no windows but skylights that flood the rooms with natural light.

The guest rooms feature windows side by side that go to the edge of the room, a special feature of Midcentury Modern homes. It’s a feature Weaver’s daughters used to let their cat inside at night, Austin adds. The rooms also include large closets with a storage area above them.

In fact, the entire home has lots of storage space, a feature Austin really appreciates. “I’m not a neat person, but I don’t like clutter. So it’s perfect for me,” he chuckles.

The spacious living room with gas fireplace and floor to ceiling sliding glass doors has much to recommend it, but so does the small patio that is beside it with a distinctive sunshade and screen over it that keeps out the mature citrus trees that peek over the red brick fence around his yard. But he has some advice for anyone wanting to renovate a home from this era that needs some tender loving care. “Plan on exceeding your expected budget,” he says, smiling.

Nonetheless, Austin says the price was worth it to be part of the revitalization of central Phoenix. “I couldn’t live in Gilbert, just because everyone has the same house,” he says. “People here are taking pride in home ownership and in the community.”

He cites the existence of a growing number of new restaurants, retail, coffee shops and other developments. He also has observed that it’s not just Millennials who want to be here, but a mix of “empty-nesters who want more” than the suburbs can offer them.