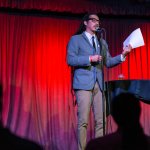 On Tuesday, March 14th, Spillers—the Voice of Phoenix Fiction—delivers the seventh installment of its quarterly short fiction event, held this time at Valley Bar in downtown Phoenix. While autobiographical storytelling events abound, Spillers is the first and only to present a night of Arizona’s best fiction in a setting designed to turn writers into rock stars and give audience members the perfect path for discovering their new favorite wordsmiths. The limited-edition Spillers No.7 chapbook features all five stories from the event and is available for purchase either as a bundle with a general admission ticket; during the event; or later, at Poisoned Pen bookstore.

Spillers is the effort of local writers Robert Hoekman Jr and Brian Dunn, and was created to give voice to Arizona’s extraordinary pool of fiction talent. “Two of our past writers,” says Hoekman, “have just been nominated for 2016 Pushcart Prizes. If that’s not a testament to the quality of writing in Phoenix, I don’t know what is.” Dunn, whose humor writing appears on McSweeney’s Internet Tendency and elsewhere, adds, “It’s always a thrill to put Phoenix’s top literary talent on the Spillers stage. Their stories never fail to impress.” Curated and edited by Hoekman and Dunn, all stories are workshopped and perfected prior to the event. The readings are then recorded live onstage and featured on the Spillers After Show podcast (Best of Phoenix 2016, Phoenix New Times), along with exclusive after-show interviews with the writers. Episodes are released weekly between Spillers’ seasonal events.

To apply to become a spiller, visit www.Spillers.net.