EVKM Self Defense & Fitness to Open in Downtown 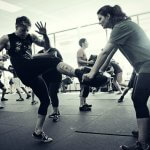 After five years in business, the premier self-defense studio in greater Phoenix, East Valley Krav Maga, has become EVKM Self Defense & Fitness following a recent move to a new space in Tempe and the opening of a second studio in downtown Phoenix. Classes are already underway at the Tempe location, while the Phoenix studio will open on Saturday, January 14 with a free workshop – an intro to the Israeli martial art of Krav Maga – at 10 a.m. (based on a first come, first served basis). The new Tempe location (1332 E. Apache Blvd., Tempe, AZ 85281) not only doubled the size of the space from 2500 to 5000 square feet but has also allowed the studio to double the number of classes offered, increasing from 20 to almost 40 classes per week. In addition to Krav Maga and kickboxing, the class schedule also includes the launch of their “Young Warriors” youth program, which teaches age appropriate lessons, techniques and fitness for age groups 4 to 8 years old, 9 to 14 years old and a teens-only group.

The school’s growing membership also extends beyond the Tempe borders, which is what prompted owner and chief instructor Derrek Hofrichter to open a second location in downtown Phoenix (705 N. 1st St., Suite 105, Phoenix, AZ 85004). “A number of things have led to our growth – such as, recent national events prompting citizens to make self-defense a priority to celebrities training in Krav Maga for upcoming action roles – so we’ve been fortunate as one of the leading certified schools in the state to be at the forefront of what’s becoming a trending workout and self-defense system,” said Hofrichter.

A more intimate space, at 1600 square feet, the downtown Phoenix studio will be offering Level 1 Krav Maga classes only, for new members to learn the fundamentals of the Israeli martial art. “Our classes foster a very inclusive environment so I wanted our Phoenix location to be a great space for new members to focus and master the basics while also becoming a part of the Krav Maga community,” said Hofrichter. The grand opening festivities on Saturday, January 14 will include a complimentary workshop, led by Hofrichter, from 10 – 11 a.m. that will be an intro to Krav Maga; going over the movements and fundamentals of practical self-defense to keep one stronger and safer in any situation. This in addition to complimentary snacks and beverages throughout the day.

Classes at EVKM Self Defense & Fitness – offered Monday through Saturday (view the full schedule here) – teach everything from Krav Maga self-defense fundamentals and attacks to advance techniques, such as weapon defense and active shooter protocols, in addition to a series of kick boxing classes. Their new “Young Warriors” program for children and teens focuses on building confidence while also teaching self-defense, discipline, and focus and listening skills.

The studio is led by Hofrichter, a Second Degree Krav Maga Black Belt and the only licensed instructor in the state to have attended, and received multiple diplomas, at the Wingate Institute in Netanya, Israel – the home of Krav Maga. His team of eight instructors are also all certified Krav Maga instructors.

For more information on EVKM Self Defense & Fitness, visit www.EastValleyKravMaga.com or call 480.535.7087. For ongoing news, updates and self-defense tips, connect with EVKM on Facebook and Instagram.

Images courtesy of EVKM Self Defense and Fitness.

In this story: Derrek Hofrichter, EVKM Self Defense and Fitness, Krav Maga