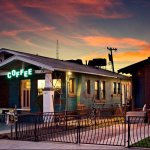 This morning, John Sagasta, owner of Jobot Coffee & Diner, announced via Facebook that the longtime Roosevelt Row business will be closing on December 23. His post, which speaks to this neighborhood staple’s cultural impact on downtown Phoenix, is published in its entirety below.

Along with this loss, the closing of Jobot will also result in 30 people losing their jobs, in the midst of the holiday season. If you or someone you know is in a position to hire these displaced employees, we urge you to comment below or to contact Jobot via Facebook. Eleven years ago I was lucky enough to run into two of the greatest people around, Lisa J. and Joey G, that had convinced me that a little broken house on 5th street was going to make a great home for an artist run project called Conspire. To be part of Conspire you had to make something to sell in it, and if you sold in it you were required to work in it, that’s it. Participate and you’re in. Though lawless in many ways, we were able to produce an iconic project that blossomed on a 5th street that at the time had no foot traffic, no support from the city, and no support from the press. Now one can argue that it has become one of the most sought after blocks in Downtown Phoenix. Fifth street’s success is not due to the efforts of one but just like Conspire the participation of many. It was Lost Leaf and, it was Hood Ride, it was Modified, it was Fate, it was Made, it was Tumbleweeds, it was Adrian Fontes, it was Heather, it was Conspire, it was Aside of Heart, it was UM House, it was El Mac, it was Think, it was Steve Strange, it was Doctor Joe, it was Mike Little, it was Parris, it was Yazzie, it was Pretty Pablo, it was Leslie, it was Josh, it was all the Reubens’, it was Bully it was Tato, its was Nikki and Billie, it was Bodega, it was Gallery Celtica, it was Phoenix New times, it was Black Adrain, it was 5th Row Studios, it was Stacy Champion, it was JB and all the other Long House crew, it was Henry, it was Paul Jones, it was EMT, it was Preacher, it was Goonie, it was Just Chris, it was AJJ, it was Leanne, it was Robyn, it was Tara, it was Swanson, it was PAO, it was Ally, it was TumbleTees, it was Buds, it was Lawn Gnome and A. Johnson’s harmonica, it was Grow House, it was Nitty Gritty, it was Travis, it was Angel, it was Niba, it was Suzie, it was Quincy, it was Jason, it was Bradford, it was Melt, it was Flowers, it was Melty Face, it was Marge, it was D, it was Downtown Devil, it was CPLC, it was Dave Therrian, it was all the kids at Bio Science, It was all the kids from ASA. Its was Kyong and Breeze, it was Silvana, it was Casebeer and it was Randall, it was all the compound crew, it was Woody, it was Chadwick, it was Nobody, it was Eye Lounge, it was Richard, it was Sue, it was Robert, it was Lee, it was Lyndsey, it was Dominic, it was Lalo and Pablo, it was Kerri, it was Super Dave, it was Mario, it was Djent, it was PHX BUX, it was Paint Phx, and so many other people, places and things. The creative efforts of a community is what transformed this place into something very special and unique. It’s been host to more ideas than could be repeated. Fifth street has been the springboard for many startup businesses, art projects, careers, relationships and families. It was mecca.

It seems now that Jobots time has come to pass the torch like so many before. It goes without saying that this decision does not come easy and is only because every effort to secure our building was unsuccessful. We are not at all prepared for this move so our next steps are still being determined. Sometime in January we will be attempting to move coffee and pastry operations to Melt temporarily until a better solution can be found. There are no hard feelings towards the landowner as we understand sometimes business is business and this unfortunately is one of those times.

Our last day of service is December 23 (maybe the 24th I’ll keep you posted). Up until that point we will be attempting to run out of food product so understand availability of some favorites may be limited. We will be moving out of the building December 26 and would love some help packing things and cleaning up seven years of mess.

There is also the great concern of our staffs future. This decision will displace 30 great people and I ask if you are looking for any help or have any good leads please let us know. We can post it on our internal communications page. I can vouch for all of them. Except maybe Nick, but he is such a good dancer its great to have him around :),

Thank you everyone for your years of support. I know to many of you this place means as much to you as it does me. If you catch me getting teared up over the next few weeks you know why, but I understand this; the pioneering spirit of 5th street street lives on. It’s the spirit of the arts district.

You hear a lot of talk that big business has squashed the arts district. It hasn’t. We are still here. This is Phoenix. Rebirth is part of the deal.