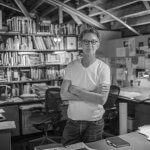 More than a decade ago architect Mark Ryan frequently had to drive to go out to lunch from his office space in Roosevelt Row.

Now the design principal of HDR’s architecture studio in Phoenix, Ryan takes advantage of the newly widened sidewalks in Roosevelt to walk to one of the many nearby restaurants. These restaurants and more are a reflection of the change that Ryan has witnessed in his time in downtown Phoenix. And as the designer for some of these projects, he has helped bring about that change. Soon, there will be another: The Dressing Room, opening near his studio in the monOrchid building. Located at 214 E. Roosevelt St, Ryan designed the 500-square-foot restaurant within the building that was originally constructed in 1947. The restaurant’s name is a function of its past, when performers in a nearby drag bar years ago used the space to dress for their shows.

The restaurant, expected to open by the end of the year, has just a few tables inside, along with a small open kitchen. An aluminum door with a glass panel allows passersby on the street to look all the way through the restaurant to the outdoor patio right behind it. “We’re still seeing the demolition of some old friends, these touchstones with the past,” Ryan says, wistfully. “It’s good to see these buildings finding new life.”

Ryan has an eye for redesigning small spaces. About 14 years ago, he approached Wayne Rainey, the owner of the monOrchid building, about creating a studio space for himself at a time when there was no space to rent. He created a staircase that leads up to a 420-square-foot space within the old trusses that he affectionately calls a treehouse.

He also ended up redesigning the rest of the building, which now includes a gallery, studio, co-working spaces and café. It now regularly draws thousands of people to tour it on First Friday art walks. Ryan acknowledges the challenge the community faces as more development moves in, as he stands on the sidewalk outside the building staring up at the new taller, denser buildings that surround it. “Moving forward, how does something this scale compete with all that? I don’t know what the answer is,” he says.

But as president of the Phoenix Metro Chapter of the American Institute of Architects (AIA), Ryan hopes with a lecture series at universities, symposia series and the recently concluded design competition, in collaboration with the City of Phoenix, that the group can be a positive influence in coming up with solutions.

The AIA includes an executive board with architects on it and a 30-member advisory council, including five non-architects and a mix of members focused on the larger city conversation and broadening the discussion, he notes. “We’re trying to have an impact on the evolution and development of the city,” he says. “We’re passionate about the work we do, but at the same time thinking about the input and engagement of others.”

Right now, construction cranes spot the city. “We hope the work is done well, done thoughtfully and making a larger contribution to the community,” he says. “It’s not just an 8 to 5 downtown anymore.”

Ryan is also having an impact with the many projects he has designed in Phoenix and the surrounding area. He recently won an AIA design award for The Department, located on the sixth floor of the building at 1 North First Street.

Az Business Magazine recognized The Department and MarketplaceONE as one of its “Top 10 Coolest Offices.” Among other sustainable strategies, acoustical panels used in the project were salvaged from the Phoenix Children’s Museum, he notes. Avenida Rio Salado, a public art project for the City of Phoenix, conceived in collaboration with Matt Moore and initially developed in 2011 involving the realignment of Broadway Road in South Phoenix between 7th Street and 51st Avenue, is now beginning construction.

Ryan is also well known for being part of the trueNorth public art project with his life partner, artist Mayme Kratz, that is located at the Tempe Center for the Arts, and for his work on the 2006 expansion of the Phoenix Art Museum, a project he worked on with Tod Williams and Billie Tsien, architects who are now working on the Barack Obama Presidential Library in Chicago.

In an effort to branch out and do larger projects with even greater potential for impact, earlier this year Ryan joined HDR’s architecture studio in Phoenix as a design principal. He and his team are currently involved on a project that will take the Arizona State University buildings that once housed the law school in Tempe (now located Downtown) and turn it into the new home of the College of Liberal Arts and Sciences.