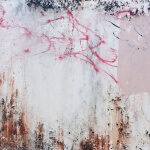 Break out that winter wear and bundle up for an evening of outstanding local artwork and amazing exhibitions. Phoenix won’t be holding anything back this First Friday, so grab a friend and hit the streets to discover what one of the nation’s best art walks is all about. Want to learn more about what to see and how to get around? No problem, check out Artlink’s website.

Urban Abstraction
Join Miami-based artist Jel Martinez for his solo exhibition that highlights the relationship between vandals and graffiti cleanup crews in metropolitan cities. Focusing on depth of layers and textures, Martinez elaborates on the “process of building up and tearing down art…”, which results in a conversation between urban artists and the city’s inhabitants. Join the conversation at 9 the Gallery from 6-10 p.m. Ofrendus Y Arte (Altars and Art)
This Dia de los Muertos-inspired art show brings together nearly 20 local artists including Such Styles, Mata Ruda and Tato Caraveo, in celebration of the traditional Mexican Holiday which honors our loved ones who have passed. This colorful exhibition truly allows the artists to bare their bones and exhibit a piece of work that connects on a deeper level. Join the festivities from 6-10 p.m. that include live music and face painting, located at Grand Arthaus, 1501 S Grand Ave. Beyond the Script
This group show includes Jose Benavides, Marco Albarran and Ashley Macias as they exhibit their contemporary bodies of work at one of Phoenix’s best galleries. Although their styles are drastically different, the exhibit has a cohesiveness that leads you on a journey from one piece to the next, telling a story in way. It’s a story that reads between the lines, a story that is, “beyond the script.” Open from 6-10 p.m., located at Shade Gallery in the MonOrchid at 3rd St. and Roosevelt.

Emphatics: Avant-Garde Fashion ‘63-‘16
Free to the public on First Fridays, the Phoenix Art Museum will host a multi-faceted event featuring the winner of RuPaul’s Drag Race Season 3, Raja! With food, drinks, a live DJ, one-of-a-kind fashion show and so much more, this is a night you won’t want to miss. But there’s no doubt it’s a high fashion event so dress your best! Open from 6-10 p.m. and located at 1625 N Central Ave. More info here.

Cryptococcus
Local artist Lee Davis has been hard at work to deliver a truly creep-tastic exhibit just in time for the Halloween season. Cryptococcus explores the horrific world of true zombieism in insects…. Wait, what?! Davis has done his research and is excited to present a colorfully playful show that offers a glimpse into his detailed process through abnormally bright imagery, coupled with some textbook facts that may prove useful during trivia night. Check it out from 6-10 p.m. at Rhetorical Galleries at 408 E. Roosevelt St.