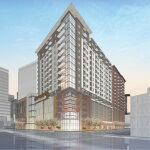 In April of 2016, RED Development announced a new high-rise residential and commercial project for Block 23 in downtown Phoenix that will include a Fry’s grocery store. Last week, the Phoenix City Council approved $18.3 million in incentives that will allow this project to move forward, with a plan to be open by 2018.

This news has been broadly welcomed by downtown residents and workers, who have long lamented the fact that our urban core is quite literally a food desert. So after years of discussion about the possibility of a downtown grocery store, why now? According to Jeff Moloznik, Vice President of RED Development, the firm that also developed CityScape, “It has a lot to do with all of the positive development and momentum that’s been in downtown for the past five years.”

As downtown Phoenix has recovered from the recession, more businesses have opened and more people have moved here, creating a viable need for an amenity like a grocery store. “We finally have a good solid set of annual retail sales comparisons and residential rental rates, so people can start making investment decisions based on those known numbers and rates,” said Moloznik. The ultimate choice for Fry’s to be the selected grocer was one that arose organically, according to Moloznik: “Development happens where the right developer meets the right property with the right tenants. . . We always felt like there was room for a grocery store in downtown, but it isn’t until the grocery industry elects to make the investment that it actually is real and matters.”

Though RED has a longtime working relationship with Fry’s and its parent company, Kroger, as tenants in other properties, it’s more than that connection that makes Moloznik feels Fry’s is a great fit for downtown.

One reason is their reputation as a contributor to the local community – from the large number of people they employ, to their work with various charities, to their sponsorships with established downtown entities like Chase Field and Talking Stick Resort Arena. “I think there’s something special about Fry’s attitude toward downtown Phoenix that made them special for this. You can see it by the marketing and by the community advocacy that they do,” said Moloznik.

Another thing that makes Fry’s uniquely qualified for this project is their experience operating full-service, vertically-integrated grocery stores in urban settings around the country. The design of this store will build on best practices from these existing stores and will result in one that is optimized for downtown patrons. According to Moloznik, Fry’s is passionate about the design and layout of the store, and is putting in the time and effort to create a flagship outlet. They have also been intentional in incorporating design that maximizes the pedestrian experience. One example of this is the inclusion of a 15,000 square foot basement that will house all of their back-of-house operations, including their bakery and butcher, which will allow space for additional retail at the street level. The location of the development is adjacent to CityScape Phoenix on the Valley Metro Light Rail Line.

“It will be a truly 21st century grocery store in the sense that it is one part restaurant, one part pharmacy, one part wine bar, one part butcher,” says Moloznik. “It’s got everything from the ability to have groceries dropped in the trunk of your car as you pull up after you’ve filled up your shopping cart on your smartphone, to a full cafe, where you’re gonna be perfectly content and comfortable to dine there morning, noon and night.”

David Krietor, CEO of Downtown Phoenix, Inc. feels this is a major step for downtown Phoenix. “This is a great move for Fry’s and will be a wonderful amenity for the thousands of people who live or work within walking distance of the store. Perhaps as important, it will be a symbol that downtown Phoenix has emerged as a vibrant and connected community that we can all be proud of.”

Moloznik believes the store is a key element in the future of downtown Phoenix. “It’s one of the critical anchor institutions for downtown. We have all the primary anchors… And we need to have a grocery to kind of plant the center of it all. That’s what the grocery store provides: it become a nucleus for sustainable life in downtown.”