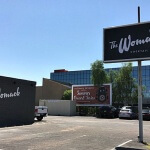 , a throwback to the old Chez Nous is set to open in late September. Genuine Concepts, the restaurant group behind The Vig, The Little Woody, Linger Longer Lounge, Cobra Arcade Bar and other local favorite spots pays homage to the vibrant Phoenix nightlife of night’s past. The Womack Cocktail Lounge recaptures the glamorous yet casual mood of a 1960s cocktail club and will even feature the R&B legends Roscoe Taylor Band for your dancing enjoyment on the weekends. Set in the old Apollo’s building on 7th St, (which was designed by the same architect using the same floor plan as the original Chez Nous and Copper Queen) the beautifully appointed bar room is cool and dark and complemented by a curated playlist of vintage cocktail jazz, samba, old R&B, funk, and soul. Walk into the Womack and walk into your new home away from home.

The Womack is located at 5749 North 7th Street in Phoenix and will be open 4pm-2am Monday through Sunday.

Backstory
“There are a lot of people kicking around the Valley who went to Chez Nous. It was such a beloved and iconic place from a different era,” says Tucker Woodbury, partner of Genuine Concepts. “For us, we’d love to celebrate that and resurrect some of Phoenix’s old history and are trying to recreate it with The Womack.”

The Womack Name
In 1963, Andy Womack, a famous rodeo clown and building developer had his sights set on opening a country & western bar on 7th Ave and Indian School Rd. His wife at the time had a different plan. Maureen Womack’s vision was to open a “classy French lounge,” which they did. They named it Chez Nous. It switched ownership several times over the decades, but until 2007, Chez Nous remained an icon of a lounge, offering live music and a cool dark sanctuary for bar goers of all types. Live Music
Genuine Concepts is proud to announce that The Womack will be featuring the legendary R&B group, The Roscoe Taylor Band. Taylor, an AZ native and vocalist, formed the three piece group that ended up being Chez Nous’ house band for 13 years beginning in the early 90s. Roscoe’s unmistakable gravely, soulful vocals and charismatic persona became a part of the Chez Nous experience.

Offerings
Familiar faces of Genuine Concepts will bolster The Womack with many years of top notch skills and experience in the industry. Chris Hardin’s cocktail program is based on 1960s classics that your grandparents would recognize with a fresh and modern touch, including a Sloe Gin Fizz and an Amaretto Sour.

In this story: Chez Nous, Cocktails, Genuine Concepts, The Womack