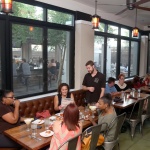 Every month Genuine Concepts hosts its Community Handle program at all of The Vig locations across the Valley including Arcadia, Fillmore, Uptown and McCormick Ranch. The Community Handle is a charitable program which features a participating brewery to sponsor chosen organizations within the greater Phoenix area. The Vig has partnered with Tempe, Arizona-based Four Peaks Brewery to help support Phoenix Children’s Hospital’s ‘Go Gold’ campaign for the month of September. With each pint of Four Peaks 8th Street Pale Ale sold, The Vig and Four Peaks will each donate $1 to Phoenix Children’s Hospital.

Through September, Phoenix Children’s Hospital is asking the Phoenix community to ‘Go Gold’ during Childhood Cancer Awareness Month. More than 300 child patients are diagnosed of cancer each year at Phoenix Children’s Hospital and that doesn’t include those already fighting the disease. More than 90 patients who receive chemotherapy and other treatment in the Center for Cancer and Blood Disorders every single day.

Phoenix Children’s Hospital’s goal with the ‘Go Gold’ campaign is to raise $1 million during the month to benefit the Center for Cancer and Blood Disorders. With the vast increase in cancer diagnosis of children, one every three and a half minutes actually, Phoenix Children’s is expanding the center and wing of their building to tend to hundreds of more patients every year. Local businesses and the community is urged to show support during the month of September for their ‘Go Gold’ campaign.