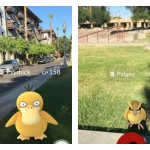 If we didn’t know any better, we might think people in downtown Phoenix had gone crazy. They’re out wandering the streets in the middle of the day despite the heat and slipping words like ”PokéStop,” “Pidgey” and “Squirtle“ into every day conversations. Of course we know this is all because of Pokémon GO, Nintendo’s smartphone-based game released on July 6 that has since induced its own kind of worldwide mania. Whether you love it, hate it or still aren’t quite sure what to make of it, what we can say is that the game has introduced a whole new way to explore downtown Phoenix.

In order to play the game, you must physically move from point to point, or “PokéStop” as they are called, in order to collect the “Poké Balls” needed to catch the Pokémon characters that suddenly appear on your screen. PokéStops are stationed in a variety of locations, from businesses like Crescent Ballroom and FilmBar to other points like public art pieces or historical markers. Essentially, players are led on a Poké-guided tour of downtown Phoenix.

According to Crescent Ballroom trivia co-host and Pokémon GO fan, Ryan Compton, the game has had a positive effect on downtown.

“Pokémon GO! has a ton of upsides that naysayers tend to ignore when poking fun at it,” says Compton. “To play at a high level, the game forces you to get out of your house and explore your environment. Along the way, you might grab a tasty beverage at a local bar or maybe you’ll interact with a random stranger that you never would have met otherwise. Local spots, such as Cobra Arcade, hold Lure parties to bring in players and help create a stronger community. The game is a really inventive way to positively contribute to the overall downtown experience.”

And even if you’re already familiar with the downtown landscape, Pokémon GO may lead you to points of interest that you might not have noticed before. Here are a few of the more obscure downtown landmarks that we uncovered in our week of hunting for Pokémon:

Lady Gaga Mural: Who knew Lady Gaga liked to hang out in downtown? Or at least in the form of this mural we found on the side of a brick building near 5th Avenue and Jackson Street. Cat on ASU Mercado: This feline sculpture perched on top of the ASU Mercado building on Monroe Street, a bit west of 7th Street, reminded us to look up every once in a while to catch some of downtown’s delightful details. Combine Studios Water Fountain: On the west side of Combine Studios we came across this cool vintage water fountain – a particularly useful find for when you’re out hunting Pokémon in the sun! So while you’re out looking for Pikachu this summer, be sure to stop and take in the downtown sights. You might uncover something new or rediscover an old favorite spot. And of course keep safety in mind while you’re doing it: stay aware of your surroundings and never play Pokémon GO while driving.