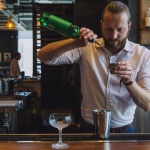 Blue Hound Kitchen & Cocktails in Downtown Phoenix, known for some of the best cocktails in the city, has a new head bartender leading the charge, Noah Momyer. “It doesn’t take a lot of ingredients to make a killer drink, just proper measurements and technique,” says Noah. This emphasis on substance over flash defines Noah’s approach to cocktailing, a vision honed over his decade-long career behind the bar. A veteran of several celebrated watering holes in the Pacific Northwest, including Vessel, Monsoon and Mistral Kitchen (all in Seattle), Noah most recently worked at Scottsdale’s Second Story Liquor Bar. When he’s not experimenting with new ways to mix mezcal, he can be found indulging his twin passions: playing music and hanging with his two-year-old son.

Since joining a couple months ago, Noah’s first order of business has been putting his own spin on Blue Hound’s already well-loved cocktail menu. Wildly popular favorites, like The Lawless, remain. A few of Noah’s new standouts include: