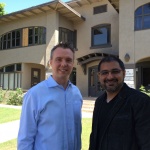 By the beginning of next April, downtown Phoenix will be home to yet another residential development when a historic office building on Roosevelt Row is restored back to its original purpose: multi-family housing.

Built in 1922, the historic building located at 402 W Roosevelt Street once housed eight apartments across its two stories. However, like many large two-story historic properties in the area, the 7,700-square-foot space was converted to professional offices in the early 1980s. The 94-year-old building at 402 W Roosevelt will be repositioned from offices back to apartments. Photo by Lauren Potter.

After purchasing the property in February 2015, Phoenix-based holding company SEBO Enterprises, LLC has plans to convert the property back to its original eight-apartment design.

At a time when there’s a lot of new housing in the area, SEBO has managed to find a unique niche.

“We’re focusing on boutique community living,” said Bryan O’Keefe who, alongside his wife Shelley, is managing partner at SEBO. O’Keefe said SEBO targets properties that are in great areas with long-term potential, but that also “need some love.”

O’Keefe said that it’s important to preserve the historical nature of the downtown Phoenix area — something that neighborhood residents are likely to appreciate.

“The people that live down here want to see the older buildings preserved,” O’Keefe said.

Although the historic property was very run down when it was purchased, O’Keefe said he could see the potential… and some pretty great views.

“The second-floor units have incredible views of skyline,” O’Keefe said.

The project is SEBO’s first of two in the Roosevelt Historic District. SEBO Enterprises, LLC also plans to revert the historic building at 245 W Roosevelt back to apartments. Photo by Lauren Potter.

In June 2015, SEBO also purchased the historic property at 245 W Roosevelt, just south of Pita Jungle. The red brick building with white trim is currently used as professional offices. O’Keefe said he also plans to convert the property back into apartments later in 2018.

Design firm MoD a+p will provide architectural and planning services on the 402 W Roosevelt property. The firm’s previous projects include other multi-family redevelopments in the area such as Aura at Midtown, as well as recent restaurant and marketplace concept The Orchard in Phoenix’s uptown neighborhood.

According to Moazam Khan, MoD a+p principal and creative director, the building’s exterior design will be retained. It will also influence MoD a+p’s approach to the interior space, which is currently demolished.

“We want to carry the same design language to the interior,” Khan said. The eight rental units will range from 835 to 1073 square feet, each with single bathrooms, and one and two bedroom options. According to O’Keefe, pricing has not yet been set. Although interior renderings aren’t finalized, Khan said design finishes could include such things as small octagon tiles and rustic fixtures.

While the project may not provide the same density as other new developments in the area, it is significant to the cultural fiber of the downtown Phoenix community.

Architecturally, the 94-year-old building is Prairie School style (think Frank Lloyd Wright). In addition to its unique design, the property is one of the few remaining apartment buildings of its era still present downtown.

According to Khan, retaining historic buildings adds to the grittiness, character and diversity of the downtown Phoenix area.

“Otherwise, we lose the identity of who we are today,” Khan said.

“Every great city is built on its history.”