Wire | Learn About the Grand Canalscape Project on June 14 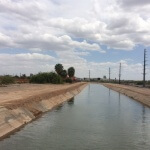 The city of Phoenix is hosting a public meeting on Tuesday, June 14, to provide an update on the design plans for the first and second phases of the Grand Canalscape project. The vision for the canalscape project originated with Arizona Forward, a local organization. The canalscape vision was further supported by the ReinventPHX community outreach effort in which residents voiced strong support for canal bank improvements along the Grand Canal.

Phase one will enhance the Grand Canal from approximately 15th Avenue to 16th Street and Indian School Road (Uptown Area) and near 36th Street terminating at 40th Street (Gateway North). For the Uptown Area, the improvements include a multi-use commuter path along the north bank, pedestrian lighting, landscaping, public art elements, neighborhood links to local streets, and signalized trail crossings at Seventh Avenue, Central Avenue and Seventh Street. For Gateway North, a neighborhood path is proposed primarily along the south bank with neighborhood links to local streets and minor public art elements along the pathway. Phase one is funded by the City of Phoenix and Salt River Project.

Phase two of the Grand Canalscape project is composed of three segments located along the Grand Canal alignment: segment one from I-17 to 15th Avenue, segment two from 16th Street to 36th Street, and segment three, from 40th Street to the Phoenix/Tempe border. The concept and design specifics are in the early stages of development. More information will become available as design progresses. In addition to funds from the city and the Salt River Project’s municipal aesthetics fund, phase two will be primarily funded by a grant from the U.S. Department of Transportation.

The Grand Canalscape project is overseen by the city of Phoenix Street Transportation Department and the Phoenix Office of Arts and Culture.

The design update meeting will be held from 5 p.m. to 7 p.m. on Tuesday, June 14, at Gateway Community College, 108 N. 40th St., (Copper Room – Building IE 1302). During this meeting an overview of the project will be presented at 5:30 p.m. The information presented at the meeting will be made available on the project website following the meeting.

For more information about this project visit grandcanalscape.com or contact the project hotline at 623-825-3444. The Twitter hashtag for this project is #GrandCanalscape.

Photos courtesy of City of Phoenix.