Wire | Submit Your Nominations for the 2016 Ripe Awards 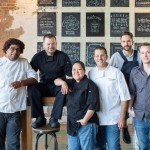 The Ripe Awards honor the rising stars of the greater Phoenix food scene, and this year’s recognition ceremony is slated for Saturday, July 30, 2016.

Now in their fourth year, the Ripe Awards will once again recognize cutting-edge chefs and a bartender from across the Valley who are expected to make a major culinary impact in the year to come. Winners will be chosen by representatives of the Phoenix Art Museum and The Arizona Republic following an open-to-the-public nomination process. Ripe nominees are acknowledged for their unique contributions to the local culinary scene and their ability to best represent the essence of Phoenix through food.

Have a favorite, must-know restaurant? Do you rub elbows with a top local chef? The Phoenix Art Museum wants to know about it. Visit www.RipePHX.com and nominate your pick for the top chefs and bartender who are helping to develop the Valley’s booming dining scene.

Ripe Award winners will be named in June and honored at the ceremonial tasting event set for July 30 at the Phoenix Art Museum. Attendees at the event can sample winners’ creations, sip on locally made wines and celebrate the best and brightest of the Phoenix food community. Winners of this year’s awards will join the likes of past honorees such as Justin Beckett, Charleen Badman and Gio Osso.

To submit a 2016 Ripe Award nominee, purchase tickets to the Ripe Awards ceremony (early bird tickets are available for $55, and bump to $65 a ticket in July) or learn more, visit www.RipePHX.com.