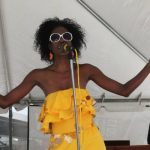 Downtown Phoenix joins more than 196 global Jazz Day celebrations on April 30, the date officially designated by the United Nations Educational, Scientific and Cultural Organization (UNESCO) to celebrate jazz and the role it plays in uniting people around the world. Arizona’s own lucky charm trumpeter Jesse McGuire headlines this year’s jazz event. Famous for his execution of the Star Spangled Banner, Jesse McGuire has performed for three U.S. presidents, and at many major sporting events, including most notably game seven of the 2001 World Series when the Arizona Diamondbacks defeated the New York Yankees to bring home a victory. General Admission – $20 at the gate

Proceeds support the NextStudent Academy, a local 501(c)(3) organization that works with local schools to make jazz music education and instruments available and accessible to students from kindergarten through college.  For more information or to make a donation, visit www.nextstudentmusic.com or (602) 524-7998.