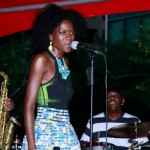 The series and event is in partnership with The International Jazz Day Foundation and will entertain audiences with a lineup of great local jazz and blues artists who will perform at Patriots Park, located in the center of CityScape, every Tuesday from 11:30 am to 1:00 pm. With cool spring temperatures and a variety of restaurants at CityScape, it’s the perfect excuse to order lunch to-go and enjoy it outside.

The free series leads up to the 5th Annual Phoenix International Jazz Day held at CityScape on April 30 from 4pm until 10pm. This same day more than 196 global celebrations take place to celebrate jazz and the role it plays in uniting people around the world. General admission is $25 at the gate and VIP seating is available for $75. Tickets can be purchased at www.ticketlobster.com or 602-268-0600. Arizona’s own lucky charm trumpeter Jesse McGuire headlines this year’s jazz event, with a surprise special guest to be named later. Famous for his execution of the Star Spangled Banner, Jesse McGuire has performed for three U.S. presidents, and at many major sporting events, most notably game seven of the 2001 World Series when the Diamondbacks defeated the NY Yankees to bring home a victory.

For more information, visit www.cityscapephoenix.com. Ample and convenient underground parking is available and validated by restaurants and retailers with purchase.