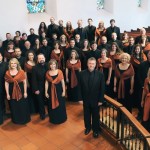 Including this win, the Phoenix Chorale recordings have now earned a combined total of twelve GRAMMY® nominations and three GRAMMY® wins. Rachmaninoff: All-night Vigil was recorded under the direction of Artistic Director Charles Bruffy at St. Peter’s Cathedral in Kansas City, Kansas with fifty-six singers from the Phoenix Chorale and the Kansas City Chorale.

The recording was released by Chandos Records on the 100th anniversary of the world premiere of Rachmaninoff’s All-night Vigil, which was performed by the Moscow Synodal Choir on March 10, 1915.

The combined ensembles held live performances of the work in April and May 2014 in both Phoenix and in Kansas City.

Upon accepting the GRAMMY® award for the recording, Bruffy stated, “I could not be more thrilled, and am so proud of these amazing singers who have so willingly gone on this journey with me, and of the overwhelming international reception this album has received.”

Jen Rogers, Phoenix Chorale’s Interim President and CEO stated, “I would especially like to thank the Phoenix community, including the many donors, patrons and volunteers for their support, without which today would simply not have happened.” With these two GRAMMY® wins, Rachmaninoff: All-night Vigil has reached unprecedented achievements for a Classical album including:

Rachmaninoff: All-night Vigil is distributed by Naxos of America, the #1 independent classical music distributor in the U.S. and Canada, specializing in state-of-the-art distribution, marketing and promotion.

Rachmaninoff’s All-night Vigil is available for purchase on iTunes and Amazon.