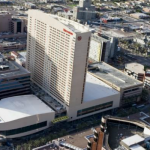 The Phoenix City Council voted today to approve the sale of the Sheraton Grand Phoenix hotel in downtown to TLG Phoenix.

“This sale is great news for Phoenix and a vote of confidence in my vision for District 7 and our downtown,” Councilman Michael Nowakowski said. “This sale will eliminate future financial risk for the City, relieve a $300 million debt and bring in a seasoned owner with a long track record of success. I look forward to the hotel being a first-class amenity for years to come and a key to the long-term success of the Phoenix Convention Center, our tourism industry, the downtown community and partners.” The City built the hotel to support the Convention Center and Downtown, but not necessarily own it long-term. The hotel’s reputation and recent performance is strong with more growth projected. The hotel had its best year in 2015 and 2016 is anticipated to be equally strong.

The expanded Phoenix Convention Center welcomed its Millionth Delegate (out-of-town convention attendee) in 2013, and the Sheraton Grand Hotel has played a major role in hosting these guests since opening in fall 2008.

TLG Phoenix is led by Lee Pillsbury, Founder and Chairman of Thayer Lodging Group.  During his 23-year history as CEO of Thayer Lodging Group, Thayer successfully acquired, owned and operated other large, first-class, full-service hotels, placing Thayer in the top 5 percent of all institutional real estate fund sponsors.  Mr. Pillsbury is a global leader in the hospitality field, widely recognized for his contributions to the industry.