Sofar, So Cool: Live Music At Its Most Exclusive 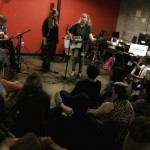 It’s a Saturday afternoon and I’m at CO+HOOTS, the popular downtown coworking space on 10th St and Washington. On this day, there’s not a laptop in sight. The desks and power cables have been pushed to the side. In their place, four different musical acts are arranging their gear to prepare for quick set changes during what is about to become a two-hour live show featuring up-and-coming music that will never be heard in this setting again. Including me, there’s 100 or so people in the audience. We’re the lucky ones.

Sofar Sounds is hosting this gig, and when you sign up for a Sofar show, there’s no guarantee you’ll make it on to the guest list. Normally, these shows are held in living rooms. Backyards. Today, in the corner of a coworking space. Seating is limited. If you do make it on to the guest list, you still won’t know where the show will be held. You won’t know that until Sofar reveals the location the day before the show by email. Even then, you won’t know who’s playing until you arrive.

If you’re like me, or any other serious music fan, this counterintuitive marketing scheme will make you giddy. It’s the live music equivalent of a birthday present.

There are loads of advantages to the setup. First, the bands get to talk to an audience that is actually listening to them. You, in turn, instead of battling through the noise of yammering crowds and clattering drinks, get to snuggle up close to a great band and listen to them live like you’re wearing headphones and the concert is for you and you alone. Until now, unless you’ve happened to know a great band full of friends willing to play in your own house, you could only really experience this kind of thing in places called “listening rooms” — spaces where live shows are held minus the distractions of cell phones and loud bars and even louder house music. They’re places more like movie theaters, where talking, video, and screaming idiocy is disallowed. They promise musicians a wholly focused audience. They promise audience members a distraction-free, total listening experience. They’re also downright uncommon.

Sofar turns any room into a listening room.

It can actually be jarring to the musicians. When Chad Gregory strums the first notes of his first song, the crowd goes silent. We’re all ears. It’s a musician’s dream to have such a focused audience, but Chad is used to playing in bars. Between songs, he says, “Thanks for hanging out,” like he’s fighting to hold the attention of a distracted crowd. It takes a minute to get used to the environment. Cat Martinez, Sofar Phoenix’s Communications Coordinator, says the musicians end up loving it. “Whenever we get artists to do this for us,” she says, “they’re like, ‘When can I do this again?!’”

It creates a situation bands don’t normally get. “It’s really an opportunity for these artists to tell their story,” Martinez says. “The better of a storyteller you are, the better you can connect with new fans, or even old fans.”

Sofar began in London, and has since expanded to include a long list of cities who organize shows like this one by way of a collection of volunteers. They find the spaces. They find the bands. Then they find the crowds.

CO+HOOTS has a good-sized space, so today’s acts were able to draw a 100+ people in the middle of a weekend afternoon.

And man do they deserve it. Chad Gregory’s masterful songwriting alone would’ve been enough to make me happy, but it was followed by one great act after another. Second on the “stage” is Maggie Szabo, a soul-pop soloist from Los Angeles with a keyboard, a guitar, a huge voice, emotive songwriting chops, and 13 million YouTube views under her belt. After Maggie comes Celebration Guns, who describes themselves as smart, quirky, indie pop. Their songs hit the indie pop mark perfectly, and involve enough drumming creativity to entertain you for hours.

Finally, Hey, King! takes the stage. This band, also from Los Angeles, is fronted by Natalie London, who comes out in Batman leggings and a gray t-shirt, looking like she’s been through enough in her life to leave no time for anything but total honesty, and whose songs come out like they’re the only part of her day worth waking up for. Her acoustic guitar looks hand-painted with a large brush, and features the band name, handwritten in black, as well as the title of the band’s EP, “We Travel By Sea.” By the time it’s over, I want to own music by every one of these acts. And that’s, presumably, what Sofar hopes to achieve: putting a spotlight on great music you may not otherwise hear about, in the most intimate setting it can conjure up.

Interested in hosting a show? Sofar’s biggest challenge is finding more hosts. Again, shows can be held in living rooms, backyards, porches, or any other tiny-while-accommodating space, but ideally, the space will also be centrally located (a little midtown is okay, too) and hold a decent number of people. Of course, Sofar will work with the constraints of the situation. If your living room holds twenty people, the audience will be twenty people.

“We just go check it out and get a scale of how many people we can have, and that’s it,” says Martinez.

Get more info at Sofar Sounds.