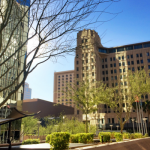 After months of careful renovations, the former Professional Building in downtown Phoenix has been restored to its original Art Deco glory. Built in 1932, the historic property, which sat vacant for many years, reopened Friday, December 18 as the new Hilton Garden Inn Phoenix Downtown. But despite all its lavish interiors and stunning city views, this Hilton Garden Inn is still missing one big thing: a restaurant.

But not for much longer. If you didn’t catch the news back in October, you’ll be surprised (and delighted) to discover that locally-owned Nook Kitchen will soon open its doors in the light-filled ground floor restaurant space at 15 W. Monroe, encompassing the northwest corner of the hotel’s blueprint.

After months of negotiations with Minneapolis-based CSM Corporation, which purchased the historic building in 2013, Frank Vairo and Erin Brown, proprietors of Arcadia’s popular Nook Kitchen, will open a second location of the cozy Italian eatery in the recently renovated Hilton Garden Inn. With a slightly different timeline to the hotel’s soft opening in December, the new location of Nook Kitchen is set to open mid-February 2016—likely at the same time as the hotel’s official grand opening. Unlike their sister location at 36th Street and Indian School, Nook Kitchen at the Hilton Garden Inn Downtown Phoenix will have a distinctly Art Deco feel.

Because of the historical nature of the building, Brown said the design is a fusion between modern day and Art Deco. “You’ll know you’re in a period piece, but it won’t feel foreign,” she said.

Known for their Italian-American comfort cuisine including dishes like chicken marsala, short rib bruschetta and wood-fired pizza, Nook Kitchen opened their original Arcadia location in 2013. While Brown said the menu will be similar, she said Nook is excited to offer a few more “sophisticated selections” as well, adding that she and the Nook team feel that the diners in downtown Phoenix have a slightly different palate.

“There will be more people coming from various metropolitan cities and they might have a different palate than our neighborhood feel in Arcadia,” Brown said. “We reflect the neighborhood’s taste.” Given the diversity of the downtown Phoenix neighborhood in which Nook will be located, Brown also emphasized that along with its swanky Art Deco-inspired interior, both the restaurant’s menu and design will remain approachable.

But how exactly does a such an approachable and more importantly, locally-owned, restaurant become the number one choice for a brand new Hilton in downtown Phoenix?

“Someone from CSM out of Minneapolis came to Nook (Arcadia) and sort of courted us,” Brown said. “It was really flattering and exciting.”

“It seemed like a once in a lifetime opportunity,” she said.

In a day and age when a national chain (even if upscale) might very well have been a contender for the space, CSM, in their vision for the Hilton Garden Inn Downtown Phoenix, chose Nook.

“If they wanted a Mastro’s or a bigtime steakhouse they would have got it,” said Nook proprietor Frank Vairo who opened the restaurant’s original location in Arcadia after cutting his teeth at Cowboy Ciao and Kazimierz in Scottsdale.

“They wanted a more personal feel, so that’s why they came after us,” he said.

As Arizona natives, both Brown and Vairo are looking forward to being part of the resurgence and vibrancy of downtown Phoenix. Noting the wildly successful Valley Bar which opened earlier in the year, Brown said that these trendy spots are “creating new burgeoning pockets,” making downtown much like a ‘real city’ such as Chicago. However, Brown and Vairo aren’t trying to turn Phoenix into something it’s not.

After bringing back the “Arcadia feel” to the space that the original Nook now inhabits (it had become a sort of ‘greasy spoon’ before Nook moved in), Brown and the team are excited to do it all over again—but this time in Phoenix’s urban core.

“Downtown Phoenix is having such a renaissance,” said Brown, who expressed the group’s excitement at renovating the gorgeous vacant building at Monroe and Central Avenue.

“I’m the first one in my family that’s not from NY or Italy,” Vairo said. “So, to see what downtown is doing and becoming slowly over the last 10 years, and to be part of that is pretty amazing.”

“Hopefully, we’ll be a trendsetter in this historic hotel and bring it to life, and help with the resurgence,” he said.

With floor-to-19-ft-ceiling windows that surround the north and west restaurant walls, Nook Kitchen at the Hilton Garden Inn Phoenix Downtown is a grand space.

A key focal feature of the restaurant will be the large, marble topped octagon bar in the center of the room. Walking through the rich lobby at the Hilton Garden Inn and into the Nook Kitchen entry way, guests will be able to sit at four-top seating, community tables, the central bar as well as semi-private dining, with clean, elegant lines and hints of the geometric shapes that championed the 1930s era. “There will be rich textures, jewel tones, and neat plays on the Art Deco movement,” Brown says.

In addition to setting the bar style, Nook Kitchen—in their move to the downtown Phoenix urban core—also hopes to inspire another type of movement.

“We want to help be on the forefront of public transportation,” said Brown, who said the Nook team hopes to encourage people to get out of their “comfort zones” with regards to the Valley Metro light rail.

And with 172 rooms above the restaurant, in addition to a lobby bar and large patio, only leaves one question remains: Will there be room service?!

“We are doing room service,” Vairo said. “But the Hilton will be running it.”