Wire | Brighten Up The Holidays at the APS Electric Light Parade 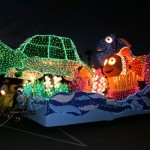 Dozens of entries displaying hundreds of thousands of lights will brighten the streets of central Phoenix on Saturday, Dec. 5 when the APS Electric Light Parade, presented by the Phoenix Parks and Recreation Department, returns for the 29th straight year. Entries for the 2015 parade will interpret the theme “Trim the Trees for the Holiday.” Minnie Mouse, from the Disneyland® Resort, is scheduled to serve as grand marshal.

The parade starts at 7 p.m. on Central Avenue at Montebello (just south of Bethany Home Road), heads south to Camelback Road, where it turns east to 7th Street where it turns south to the end point at Indian School Road. Comprehensive event information is available on the parade webpage or by phone at 602-534-FEST.

Parade lovers also may come out during judging on Friday, Dec. 4 from 5 to 8 p.m. at the event staging area at North Phoenix Baptist Church, when all motorized entries will be lit up for official review. Attendees can enter the staging area at the church parking lot entrance on Montebello Road just east of Central Avenue. Helpful tips for those planning to attend the APS Electric Light Parade:

• Consider taking Light Rail to the event to avoid traffic congestion. The parade route runs right next to the Light Rail stop at Central Avenue, just south of Camelback Road.
• The parade is a rain or shine event. Check the weather forecast and dress accordingly.
• Spectators are encouraged to bring blankets and chairs for seating.
• Crowds for this event have grown very large in recent years. Spectators who arrive at the parade route within 45 minutes of the start should respect the viewing positions of those who arrived earlier, and take a position along the rear edge of the crowd.
• Spectators should try to minimize and gather any trash and litter generated during the parade to ease post-event cleanup.
• Coolers are permitted, however, alcohol and glass containers are prohibited.
• Viewing spots along the parade route are first-come-first-served. Spectators often start arriving three or more hours prior to parade time to reserve a spot.
• Parking is available on city streets around the parade route and is on a first-come-first-served basis. Private lots near the parade area often offer parking for a fee.

Images courtesy of the City of Phoenix Parks and Recreation Department.