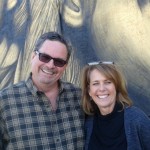 Saturday, November 28 is Small Business Saturday. Started by American Express in 2010, Small Business Saturday is a national program to help small businesses get more customers through their doors. As an aspect of their Shop Small program, American Express hires artists to work with small businesses to create murals that capture the spirit of their communities.

This year, AmEx hired muralist Shawn Bullen to come to Phoenix to create one of these murals. Bullen hooked up with local artist Hugo Medina and found just the right spot on the south wall of First Studio in downtown Phoenix. And here’s where it gets really interesting. First Studio is a unique gem on 1st Avenue just south of Roosevelt Street. Randy Murray and his wife Theresa saved the building from demolition in 2001 and renovated it to create a home for video production and related companies.

Built in 1949 as the original home for Channel 5, this building housed the very first television studio built between St. Louis and San Francisco and because of that played a significant role in the early days of television for the Rocky Mountain and Southwest regions of the country. Presidents, dignitaries, and entertainers all came through Phoenix to go “on the air” live on Channel 5. It was also the home of The Wallace and Ladmo Show, a much-loved local children’s television program that aired from April 1954 through December 1989.

In fact, Murray relied on original cast members Bill “Wallace” Thompson and Pat “Gerald” McMahon to figure out how to renovate the dilapidated building, which they dubbed First Studio in honor of its historic roots. “We walked the building with Wallace and Pat McMahon to identify what was historic and what wasn’t,” said Murray. “We gutted everything that wasn’t historic and converted it into what we refer to as the Center for Creative Endeavor.“

The building is home to 12 different video, audio, post-production and still photography companies and has been at 100% occupancy since they finished the renovation and opened in 2002. Check the First Studio website for information on all of the companies on site. “It’s unique for a city of Phoenix’s size to have a center where you have multiple video production companies,” says Murray. “People thought we were crazy, but it’s been spectacular. It’s been an inspiring, collaborative experience.”

This brings us back to the mural. Even if you weren’t aware of its significance, anyone traveling down 1st Ave south on Roosevelt is likely to have noticed the prominent Wallace and Ladmo mural (painted a few years ago by Hugo Medina) on the corner of the building. Randy had plans to someday expand on the mural to incorporate other significant images linked to its television roots, when fate stepped in in the form of Shawn Bullen and the Shop Small mural program.

Shawn had done a mural for the program last year in San Francisco and wanted to work with a Phoenix-based artist, so Randy hooked him up with Hugo Medina. The two artists worked with Randy and Theresa to figure out what images to include that would best honor the local film industry, the unique history of the building, and their Roosevelt Row neighborhood. The finished mural seamlessly blends the original Wallace and Ladmo characters with a profile of Steven Spielberg, representations of Barry Goldwater’s work and images of the RoRo neighborhood. Everyone agreed that in addition to the historic elements it was important to include images of the young people who are so integral to this thriving neighborhood and its many small businesses, so the mural includes the large smiling face of a young woman wearing sunglasses looking steadily into “the future.”

Randy and Theresa and their Creative Endeavor tenants have created a beautiful gem in this lovingly restored and re-purposed building. It is Small Business at its best. First Studio is not only home to a unique array of 21st century creative entrepreneurs, it remains very much an active part of the life of the city. Murray puts it this way, “We feel more like caretakers than owners of a historic building. We donate the space to nonprofits when we can fit it into the schedule.” He adds, “And we’re always open on First Fridays.”

If you haven’t yet visited First Studio, take advantage of the next First Friday to tour this remarkable historic building. Kris Kollasch curates the first rate art collection throughout the building, as well as regularly changing exhibitions. And remember, Shop Small, y’all.