Fushicho Daiko: Drumming Away in the Middle of Grand Avenue 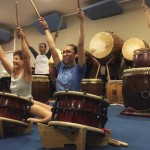 It’s not what you think.

Taking that awkward, angled turn on to Grand Avenue used to mean driving right into the one of the sketchiest parts of town. Times have changed. These days, Grand Avenue is lined with art galleries, bars, pizza places, wide sidewalks, and even bike paths speckled with large planters painted by local artists. It’s green and lush and new, and it features multiple major contributors to downtown Phoenix’s second thriving art scene (the first being Roosevelt Row).

In the middle of it all (at 925 NW Grand Ave) is a strange red building with giant commas painted on the side, and which pours out a near-constant sound of muffled drums and yelling. It’s the Fushicho Daiko Dojo, home of Phoenix’s premier performing taiko group and its corresponding student groups. (Fushicho Daiko is the name of both the studio and the pro performing group.)

Taiko is Japanese for “great drum.” And it’s no joke. The instruments involved in this ancient style of ensemble drumming are made from tree trunks, wine barrels, rawhide, metal, and rope. They’re built to last, and do, usually for several decades.

Taiko is more akin to martial arts than it is to the drumming you’re used to seeing here in the Western world. It’s athletic. It’s choreographed. It’s visceral and explosive. And there’s no forgetting it once you’ve seen it live. The sound vibrates inside your chest. You walk away with a whole-body buzz.

Doing it yourself is even better. And not just for the body-buzz. “Taiko is a really great way for people to connect with each other, and with themselves,” says Eileen Morgan, Fushicho Daiko’s executive and artistic director. This happens, she explains, because people see the chance to learn something they never knew they could. They learn that “they could be musical, they could be physical, they could challenge their brains to learn something difficult, they can connect to people they wouldn’t otherwise have met — people who are very different than them.”

That’s no joke either. As a former taiko player myself, I can attest to the massive and diverse group of friends you gain after playing with a group for a while. Taiko brings out people of all ages, all shapes, all sizes, and all ability levels. Musical know-how or not, there’s a student group for everyone.

Currently, there are 55 students across five student groups, a beginner’s class, and an intermediate class. “It’s a great way to meet a really great cross-section of Phoenix and the Valley,” says Morgan. Combined, these groups are a major feature of Matsuri, the enormous Japanese festival that takes place during the last weekend of February every year in Heritage Square. They perform year-round at multicultural festivals and other events throughout the state, as well as for corporate events, at schools, and in libraries (Morgan delivers smash-hit solo demonstrations to schools all around Phoenix and its surrounding cities). They’ve played the Fiesta Bowl parade several times. They even once had Mayor Greg Stanton join them on stage.

For the upcoming Grand Avenue Festival, the studio will be moving into its own parking lot from 11 a.m. to 5 p.m. to showcase performances by all of its student groups. The day will be capped off at 4:15 p.m. with a performance by the pro group itself. Over 30 drummers will appear on stage throughout the day.

In case you need more incentive, there will be several opportunities for you to get up and join in as Morgan and others lead volunteers through hands-on demonstrations.

That’s right. You can pick up some sticks (called “bachi”) and pound those drums yourself. No better way to blow off some steam than that. (It’s a running joke in the taiko world that, “I play taiko so I don’t kill people.”)

If you can’t wait for the Grand Avenue Festival, stop by on Halloween between 6–8 p.m. as the groups practice outside for the upcoming Phoenix Annual Parade of the Arts (PAPA) (which takes place the same night as the festival). Just find some street parking along Grand Avenue and walk toward that drumming sound. They’ll be in the parking lot, many in costume, playing amongst black lights and fog machines and handing out loads of candy.

Speaking of the red building.

Those giant commas painted on the side? That’s a mitsudomoe, the symbol now universally associated with taiko.

And the yelling? It’s the audible equivalent of a game-time high-five. Vocal encouragement is part of playing taiko. It’s built in. And judging by the pride and joy and bond of Phoenix’s taiko community, it’s not just a song and dance.

Still, in all her exuberance, Eileen Morgan wants to remind you:

Check out www.TaikoAZ.com for more information.