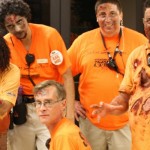 Before you lose a hand, lend one.

The biggest, baddest and bloodiest event in Downtown Phoenix wants to become one of the most charitable. This year’s festival is loaded with zombie fun for all ages, including:

Started in 2009 by the Downtown Phoenix Ambassadors, Zombie Walk has grown from a 200-person limp around Downtown Phoenix into a 20,000-attendee mega event. The signature 1.5-mile walk through downtown has become a parade-like spectacle that attracts some of the most detailed and creepiest costumes in the Valley.

Admission to Zombie Walk is free, but in the spirit of community building, Downtown Phoenix Inc. and its partners ask attendees to help us reach our food drive goal by bringing cash or food donations benefiting St. Mary’s Food Bank.