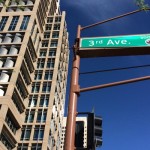 The City of Phoenix Street Transportation Department will be holding an open house to gather input from the community on proposed modifications to 3rd and 5th Avenues from Washington Street to McDowell Road and bike lanes on Roosevelt Street between 7th and Central Avenues. The planned improvements are elements of the Phoenix Comprehensive Downtown Transportation Study and the Comprehensive Bicycle Master Plan, both adopted by City Council. Potential outcomes from this project are: more efficient circulation, safer roadways, multi-modal connectivity, greater economic development opportunity and area neighborhood preservation. In this next step in the development process, residents will have the opportunity to comment on a series of options and other information that will be presented and voice their opinion on which type of improvements they would like to see on these streets.