Heartless Bastards: The Road to Phoenix 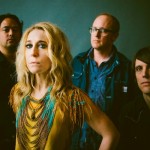 “It’s my favorite room in Phoenix, so we’re happy it opened. Somebody put a lot of love into that place.”

Wennerstrom is the renowned songwriter behind Heartless Bastards, a band known for its bold, country-tinged spin on straight up rock and roll, and for Wennerstrom’s full-throated voice. She and the crew will be back at Crescent this Sunday night in support of the group’s latest effort, Restless Ones. To ensure the ballroom’s as packed as it should be, Wennerstrom and I had an early-morning phone chat last week to talk about Restless Ones, hash out her feelings about letting lyrics age, and for good measure, a little Jack Kerouac. After a three-year stint with nary a recorded sound, Restless Ones is Wennerstrom’s 5th release, and the 2nd with the same band (the first being the 2012 album, Arrow). This time, they brought along in-demand producer John Congleton (who promptly then won a Grammy for the Best Alternative Music Album with St. Vincent’s eponymous 2014 album).

Ready or not, it was time for Wennerstrom to turn all the things she’d been writing on the road into a collection recorded for the digital forever. She wondered, though, if her newest lyrics would hold true for her as time went on. She prefers to let her words sit for a while before committing them to public release, and these were still wet with fresh ink.

“When you create things, any form of art, you put it out there in the world to be criticized, whether it’s positively or negatively critiqued, and so it made me feel a bit vulnerable to put the lyrics out there in the world without that much time to self-critique, because I’m very hard on myself. But there was also this sense of freedom. There was this really free feeling about writing something in the spur of the moment and then just letting go.”

Asked how she feels about them now that it’s been a few months, she says, “I took a breather once we finished recording and didn’t listen for a while, and it was more when I went back to listen — was I gonna feel okay about them? But you know, everything I wrote was very honest, and I realized when I listened back that I couldn’t really regret that, because I very much related to it and felt that.” The risk paid off in a particularly appropriate way on one track: Tristessa.

Initially intended for a Jack Kerouac tribute (“Tristessa” is a Kerouac novel), Wennerstrom says, “I imagined myself in that story, and pulled some different words and added some things and kinda made it my own.” Then she assembled it in a single afternoon. “I did five or six takes, and they were all stream of consciousness in the sense that I sang it differently every time and had no idea how I was going to sing it.”

When she changed course and decided to put the song in the closing spot on the new album, she went with the original recording. “I didn’t want to redo the vocals and try to recapture the idea, and the spontaneity. So we used the initial vocal track.” The band, again proving its talents, then laid down the haunted, looping music behind it. The result is very much in the spirit of how Kerouac wrote: fast, loose, in the moment, and to great effect. It’s a bit psychedelic compared to the usual Bastards sound, but the departure leaves the album with a gorgeous and longing goodbye.

Not that throwing down the background music was an easy gig. Tristessa, with its improvised melody and unidentifiable rhythm, was surely tougher than most songs to convert from idea to music. Wennerstrom is the first to admit she knows less about music and its terminology than the rest of the band. “I’m the most ignorant out of all of us,” she says. But after three years with the same musicians, they’ve learned to translate. “I think the band and I have played together now for so long, it’s become an intuitive thing and the guys really understand where I’m trying to go.”