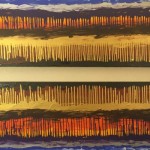 Some former government employees write memoirs. Others try for more creative outlets. Rick Naimark worked for nearly 30 years as a senior manager at Phoenix City Hall, and since retiring has found himself a minor celebrity on the Phoenix art scene.

A collection of his abstract paintings is set to debut at a Hance Park Conservancy Benefit this upcoming Third Friday, October 16. The public event has been dubbed Color the City, and will take place at the McKinley Club, a shared work and office space on Central Avenue. All paintings will be for sale in a silent auction, the proceeds from which will go toward the Hance Park Conservancy, and efforts towards realizing the Hance Park Master Plan, something Naimark has been a supporter of for a long time.

In fact, many of his paintings were inspired by local happenings and weather events, such as a particularly memorable day at the office or a traffic-stopping monsoon. A majority of the paintings are large-scale, colorful depictions, and because he has worked prolifically over the past two years, he had more than a few finished pieces to donate for the auction.

“I didn’t go to art school, and I’ve only just started … so people will bid what they think they’d like to pay and it’s for a good cause.”

Throughout the years, Naimark has pursued a variety of creative outlets, from piano to singing. And after taking a painting and drawing class at the Phoenix Center for the Arts, has made his home on canvas.

The pieces are available for view and auction beginning on October 10.