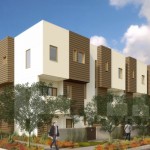 Coronado Commons is about to make your mid-city dreams come true.

Situated just a block or so away from the Phoenix Art Museum, not to mention the heart of Downtown Phoenix within walking distance, these almost-completed townhomes are capitalizing on the need for permanent housing in downtown and doing so in inspired architectural style. Built by SRM Development Arizona, the complex is made up of 20 residences located at 325 E. Coronado Road. Each unit will feature a glorious two-car garage and is set to welcome residents as early as December, with the remainder of the project set to wrap up by Spring 2016.

Although more townhomes are popping up in the metro Phoenix area, they still remain a refreshing break from the norm. The development team sought to capitalize on that quality by enlisting a real estate team that understood the value of what they’re bringing to the downtown housing landscape, so they contacted azarchitecture/Jarson & Jarson.

Founded in 1990, the local real estate firm has made a name for itself by focusing exclusively on architecturally unique, one-of-a-kind projects that embody the culture and lifestyle of our city within the desert.

Co-Founder Scott Jarson puts it simply, “We go where the architecture is,” meaning, the firm looks far and wide for the most exciting innovations and renovations the valley has to offer. And when it comes to renovations, Scott is quick to point out that the vast inventory of previously ignored historic architecture in the valley is finally being tackled with a perfectly matching renovation aesthetic.

We’re now seeing people renovate to a high level, he explains, maintaining the fabric of what made the area and architecture so interesting to begin with, while integrating modern touches and amenities. Modernism that stays true to the desert results in durable buildings that utilize materials that fit in with the landscape.

To this end, builders are utilizing more steel, concrete, and large expressive forms meant to blend into the desert landscape, something that has been on the rise in recent decades.

The ‘desert school’ of architects, Scott explains, reached a development peak between the 1970’s and the 1990’s, allowing for the style to grow and evolve, becoming much of a regional signature of housing and architecture. “Post-war, we developed a love affair with the ranch house,” Scott said, “which is actually really well suited for our area.”

Low, horizontal lines that hug the ground make sense in a place as expansive and sprawling as the Phoenix Metro area, he said. And this mindset has also led much of the urban in-fill projects, which has created a very singular thumbprint via architecture and city design.

“You can be in Phoenix and say, ‘I’m no where but Phoenix.’”

Development should continue to grow in the nearby area between Central and 7th Street from McDowell to Indian School Road, where Scott sees potential for a walkable lifestyle thanks to an abundance of small parcels that offer unique building opportunities.

Coronado Commons themselves were built to be eco-sensitive, efficient homes, Scott says, which emulate the building type we want for the future. Early adopters and those new to the area alike will be equally excited by the quality of building we’re seeing while maintaining an original downtown style.

Of the 20 residences, buyers can choose between a two or three bedroom floor plan, each stylized to what an urban Phoenician dreams about: modern indoors, great views just outside.