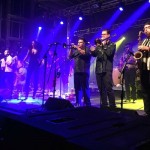 It used to be hard to find good local music in Phoenix.

Now, Crescent Ballroom can roll out one great band after another and keep people on their feet, drink in one hand, recording device in the other, for hours on end. Last Saturday night, they did just that for the 4th annual “Los Dias de la Crescent” event, which featured two stages (one inside, one outside on 2nd Ave), home-rolled burritos, drinks aplenty, a merch stand, and all the musical range you could hope to find. If you’ve been looking for a new favorite band, the event was a showcase of 10 potential candidates, each wildly different than the last. A few of the highlights: After that came Snake! Snake! Snakes! with its post-punk crooning and full-on display of offerings from its soon-to-be-released new album. And there was Phoenix Afrobeat Orchestra, whose monstrous stack of musicians would be difficult to fit on any stage smaller than an 18-wheeler and who kept the now-full crowd dancing and singing along through its entire set. If ever you want to dance a Saturday night away, this group will get you there. Special props to the group’s singer, whose tireless dancing inspired several hundred people to burn off all the energy they had left.

Sadly, I was too exhausted after all this to stick around for Snake Burner and for the Ballroom’s de facto DJ, Sean Watson, but I’m sure we’ll cross paths soon.

So what has Los Dias de la Crescent taught us?

Phoenix has always been a city of transplants, and our music now reflects that. We’ve pulled funk from one place, Columbian from another, alt-rock from several more. You name it, we’ve got it. And that, by all evidence, is the musical identity Phoenix has long been looking for: one of diversity and surprise. Now that Crescent Ballroom has come along to show off that range, we can finally see it in all its glory.