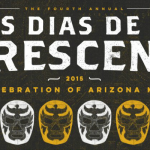 “Any excuse we can find to bring more people to downtown Phoenix, the better,” says Grace Perry, beverage director for Crescent Ballroom and Valley Bar.

That’s the lone impetus for the Crescent staff to break out of the usual schedule and fill a street with locals by putting together a two-stage, half-outdoor/half-indoor show focused on local music. “We’re trying to bring more people downtown so they get excited about it,” she says, “and this is just one more way to do that.” So here are your plans for the night of Saturday, September 26th.

Because you’re smart, you’ll get to the area right around 6 p.m. and find one of the parking lots or garages nearby with plenty of time to walk over to 2nd Avenue and Van Buren. Because you don’t want to miss anything, you’ll head straight to one of the killer food trucks in attendance, grab some grub, and take your place near the stage for a night of local favorites.

Want to mix things up? Crescent has your back. “A lot of times,” says Perry, “one genre of music can get a little boring, so I prefer it when it’s all sorts of bands.” To make the most of it, head inside for the second stage and back again to see how many of the ten scheduled acts you can see in one night. The range is guaranteed to blow your face off. “That’s probably the most enticing part about this festival is that it’s very diverse.”

I know what you’re thinking. Local music is an unknown commodity. The reason you never go out is that you don’t know which bands are worth watching and which are sort of meh.

“Flamenco Por La Vida is a standing weekly event every Saturday [at Crescent],” says Perry. And: “Snake! Snake! Snakes! is always just so fun.” And: “Playboy Manbaby is one of of best bands in Phoenix currently.” About their performances, she says, “It’s a party, that’s for sure.”

Nervous about parking? Don’t worry about that either. There are plenty of cheap lots to the north and west of the venue, and parking garages in every direction. Metered street parking may be a tough score, but you can always get lucky that way as well.

If you see me there, come say hello. I’ll be collecting quotes for the followup review.