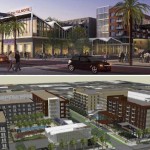 Phoenix Fillmore Partners, a development partnership between Trammell Crow Company and the Cesar Chavez Foundation, has been named the winning proposer for the West Fillmore RFP issued by the City of Phoenix.

The RFP covers the 7.5 acre site of the former Thomas J. Pappas School. Both the size and location of the site make it a key residential and retail expansion area for the West Fillmore end of the Historic Roosevelt neighborhood and downtown. An in-depth planning process involving city staff, area property owners, and consultants was used to develop the requirements for the RFP. For more background on the site and the RFP process, see our article from last December. The proposal called “The Fillmore” includes 609 units of market rate and affordable rental housing, which will be developed in two phases. In addition to the housing, the proposal includes 14,000 square feet of retail space, and 20,000 square feet of amenities: pools, clubroom, outdoor courtyards, fitness center, coffee/wine bar, restrooms, lobby areas and leasing offices.

The proposed plan includes activating Fillmore Street on the north with storefronts, sidewalk cafes, courtyards with water features, green space and shade, and ample parking. There are 780 parking spots proposed to accommodate residents and retail guests. Amenities and secondary courtyards will cover the parking structure itself.

Additionally, Fifth Avenue will provide a “critical spine” through the development, and will be activated by “lobby entrances, native plantings, parking, pedestrian scale amenities, and multi-modal traffic lanes.” The southern end of the site includes an “Urban Paseo” that will break up the super blocks and provide a pedestrian-friendly throughway that incorporates the tenets of the City’s Complete Streets policy, such as multi-modal traffic lanes, shaded public spaces, native plantings, and wayfinding information.

Dallas-based Trammell Crow is a longstanding real estate development company that has operated in Arizona since 1978. The Cesar Chavez Foundation is a leader in developing affordable housing connected to services. Previously this Trammell Crow/Cesar Chavez Foundation partnership was selected through a public RFP process as the master developer for another market rate and affordable housing project in California: La Plaza Cultura Village adjacent to Union Station in Los Angeles.

According to Eric Johnson, the City of Phoenix Deputy Economic Development Director, “the RFP and proposals in response to the RFP are just the beginning of this process. A panel consisting of a mix of business, community, real estate and city staff members evaluated the proposals and recommended the proposal that had the highest score of the evaluation criteria.”

The next steps include contract negotiations with the city, additional community outreach, City Council approval and the creation of the final designs.

At 7.5 acres, this is an unusually large development area for the City; a normal project site is somewhere around a half to one acre. There are a lot of moving parts, questions to be answered, and adjustments to be made before the project will come to fruition.

“While we are just at the beginning of reviewing the concept plans provided by the selected proposer, our goal is to work together with the proposer to develop the best project that is market-viable and consistent with the community’s and City’s vision for this area,” says Johnson.

We’ll be checking back in to find out more from the developers, surrounding community members, and businesses as the process continues to unfold in this pivotal project for our downtown.