Transit is an All-Access Pass 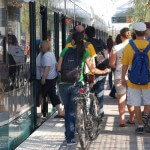 In 2000, Phoenicians voted on a four-tenths of a penny increase in taxes to pay for expanded bus service and the first 20-mile segment of light rail. At the same time the Citizens Transit Commission (CTC) was created to “assure public input and accountability on all transit and traffic improvements.” Next month, on August 25, Phoenix voters have the opportunity to approve an additional three-tenths of a penny increase to make city-wide street improvements, expand bus service throughout the city, and triple the number of miles covered by light rail. Dubbed an “all of the above solution” MovePHX, aka Prop 104, is designed to offer an array of transportation options that will help accommodate the expected growth in our city over the next 35 years and enable everyone to travel more freely throughout our city. The detailed MovePHX plan grew out of direct input from more than forty public meetings throughout the city held by the CTC. The input was clear – people wanted more transportation options; improved streets; more landscaping; safer bike lanes; city-wide bus service; and increased connectivity to light rail and the central corridor.

Not everyone has a car or wants one. Even those who regularly drive can benefit from the increased opportunities to leave their car at home that rapid bus service, safer bike lanes, and light rail provide. As District 8 Councilwoman and chair of the MovePHX committee, Kate Gallego knows from personal experience no one is immune from the vagaries of fate that may impact our ability to drive. When she experienced a seizure at City Hall, Gallego learned that if you have a seizure in Arizona, you temporarily lose your license.

She found herself relying on bus and light rail to get to her follow up doctor’s appointments and various meetings, and came to appreciate in a very personal way how much having reliable public transportation options meant to her ability to do her job and take care of herself. “I was lucky that I worked at City Hall and was being treated at St. Joseph’s,” said Gallego, “A lot of people don’t have that option. That’s why we need to build out the entire city and give everyone public transportation options.”

One key element to the MovePHX plan will be the increased connectivity to educational institutions throughout the city. Access to efficient public transportation means that wherever students may live in Phoenix, they will have an easier time getting to and from their school of choice, making it possible for more young people to take advantage of higher education opportunities. Phoenix Union High School District Superintendent Dr. Kent Scribner talks about the necessity for the Phoenix community to support students who are increasingly mobile.

“Every day, students get to their classrooms via bus and light rail,” said Dr. Scribner. “In fact, 1 in 3 transit riders are on their way to or from high school, college, vocational or job training classes. A yes vote on Prop 104 supports our schools and the students working hard to transform their lives.”

ASU student Peter Northfelt speaks to his own experience. “Most of my English classes are in Tempe and my Public Policy degree is located on ASU’s Downtown Phoenix campus. I use the light rail to get from Tempe to Phoenix at least three times a week. It’s a big part of being able to get the education I want and need.”

The current light-rail system has been a tremendous boon to our central corridor. Every day students, executives, families, older citizens, tourists, and fans headed to Suns and Diamondback games, or patrons headed to museums, the ballet or theater use the system to get to work, class, meetings and to attend events. The success of the light rail has brought increased pedestrian traffic, spurred economic development, and created new energy and a distinct sense of place in our central core. Also, increased rapid bus service has given downtown workers who want to live in more suburban parts of the city an efficient and less nerve-wracking way to get to work.

Downtown has gone from nearly deserted streets to something approaching a truly bustling city center, which is great for business and takes us closer to creating a sustainable city for the future. According to Gallego, the MovePHX investment in our transportation infrastructure will be transformational.

“We’ll look back in 30 years and recognize that this plan will have changed the face of Phoenix. It will solidify our core, and help us accommodate the estimated growth expected during the time, which will be an increase of about 1 million people, equivalent to the population of Denver.”

A sustainable city is one where people of all ages and abilities can readily access what they need and want, both in services and amenities. What “access” means can shift and change at every stage of life. An “all of the above solution” takes into account all manner of students, workers, families, and daytrippers at every stage of life who will use transit for both work and play.

Both millennials and boomers are flocking to denser, more urban, walkable neighborhoods in cities throughout the country, helping to underscore the perspective that a sustainable 21st century city is one where people of all ages and every walk of life can get where they need to go to be productive and take care of themselves and their families.

We’re still in the midst of the lazy days of summer, but we mustn’t be lazy about this coming election. Everyone who cares about the future of our city needs to take responsibility to cast your vote. Early ballots are going out this week, or you can go to your local polling place on Tuesday, August 25.