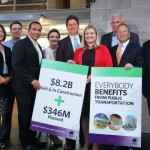 From restaurants to residential development, more than $8.2 billion in private and public capital investment has been built near the initial 20-miles of light rail that extends from Phoenix and Tempe into Mesa. Another $346 million in commercial and residential building is being planned, most of that from private developers. “Big things are happening in Phoenix because of light rail, and big things are going to continue to happen,” said Mayor Greg Stanton. “Light rail has been transformative for our downtown and our economy.  With it we’ve linked jobs, education, arts and culture in a way that would not have been possible otherwise.”

Phoenix and Tempe mayors made announcements on Tuesday at Phoenix’s DeSoto Central Market, an adaptive re-use bar, market and food court that intentionally chose their site due to proximity near the Roosevelt/Central Avenue light rail station.

“Investment in transit does more than improve neighborhoods; it improves lives,” said Tempe Mayor Mark Mitchell. “More than $3.4 billion has been invested in Tempe around light rail since construction began in 2005. Everyone benefits from public transportation.”