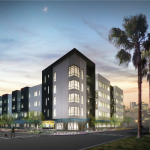 New housing options are set to arrive in Downtown Phoenix by way of South America. After arriving in Phoenix in 2006, the team immediately recognized the growth potential of the downtown area, according to developer Alvaro Sande. For the last 50 years, they’ve been creating living spaces in Chile and beyond, and specialize in efficient design, turning small units into liveable homes.

“In my country,” Sande said, “we sell units that are around 700 square feet with three bedrooms. We love designing small areas, and we love to make smaller areas feel bigger.”

In bringing that experience to Phoenix, the layouts at en Hance Park will maximize the team’s goal for smaller, more affordable spaces while incorporating high-end design features.

“We had to make smaller units, and that’s how we bring the price down but we keep the quality. We like modern amenities, we like wood finishes, we like good design, but in a smaller setting. Therefore we allow people to afford a unit,” he said. The firm has purchased 80% of the block, and plans to build more condominiums once the first phase is complete. The initial building will reach 5 stories, and include a handful of floor plans, ranging from studios, to ground floor units with private courtyards.

Looking out at Margaret T. Hance Park, which is set to undergo welcome renovations, and just a block away from Roosevelt Row, it’s no surprise the project has stirred a fair amount of interest in the community. While they are currently taking reservations, they will not begin formal sales until construction has begun.

Sande and his team will be joined by a host local development partners, including dck worldwide and formeTHIRD, and are set to break ground in August, with a projected completion of June 2016.